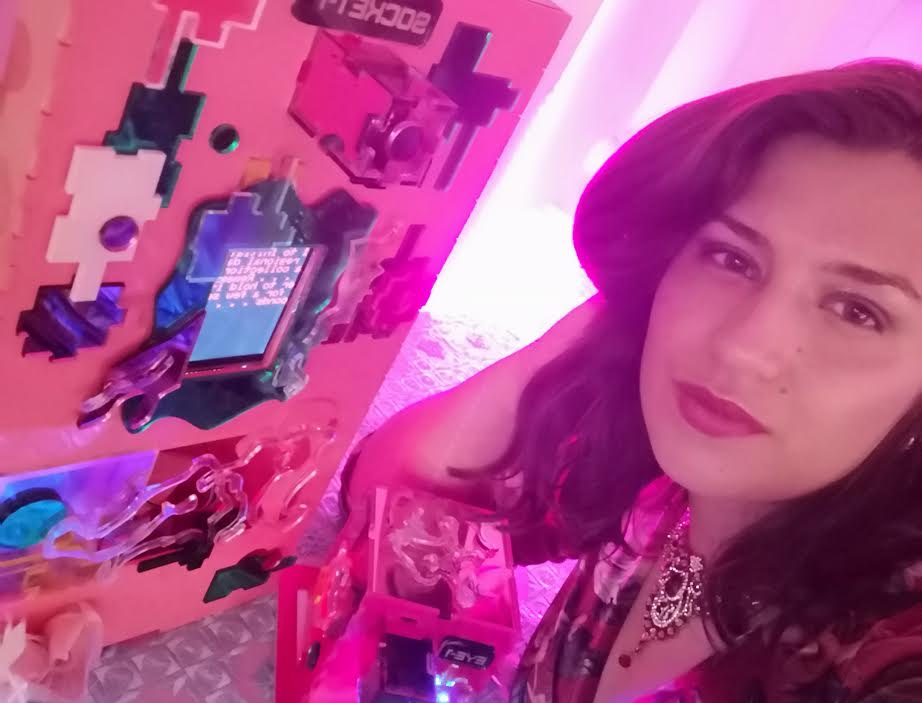 Julia is a game designer based in London. She is currently working on her Master’s in Computational Arts at Goldsmiths University. Her background is in computer science and comics and illustration. She has made a variety of web-based interactive narratives, although she is now currently focused on making physical and tactile game narratives using microcontrollers, LEDs, screens and various sensors.

Below, Julia updates us on her work since we last interviewed her in 2017. She describes some of her recent projects and tells us about studying and working in the arts-centered city of London. You can view her full portfolio here.

Interview conducted and edited by Kathryn Cooperman. All photos and videos provided by Julia Makivic.

How has your work evolved since our last interview with you?

I have moved away from creating web-based projects to making objects embedded with sensors and microcontrollers. My projects still have a strong narrative component to them, however the narrative is revealed through interacting with these physical objects rather than a website.

Tell me about the Master’s degree you are pursuing at Goldsmiths.

I’m currently pursuing an MFA in Computational Arts at Goldsmiths University. The program focuses on using computational tools as a means of creative expression. However, the programming encourages students to move away from the screen and to integrate computing tools in the environment or unusual objects.

What is the process for creating a game?

It always starts with feeling or an ambience I would like to express. Then I build the design and the interaction around that central feeling. First I make a lot of concept art which depicts scenes and characters which help me to understand who the main players in the narrative are and what it is about. Then, I think about the main interaction and how it ties into the narrative. I begin experimenting with sensors, microcontrollers and materials to facilitate the desired interaction.

What sources or inspirations do you draw upon? Who is your intended audience?

I draw inspiration from a lot of different places including music, fashion, architecture, comics and nostalgic themes. I don’t really consider an audience when working on my projects. My decision to make something is driven by my desire to turn a feeling which I can’t really articulate into something tangible.

How has studying in the city of London influenced your work?

London has an amazing indie games scene and computational arts scene. It feels really invigorating to be involved in a community of creative people. The city itself is so vibrant and dynamic. I love seeing the various kinds of architecture clashing with one another. Also, London is very close to the rest of mainland Europe, therefore the indie games and maker scenes in places like Germany and France are also very accessible.

Have you worked with any new mediums or materials recently? Do you have a preference?

I’ve recently started using various digital fabrication methods to make my games such as lasercutting acrylic and 3D printing. One of my earlier pieces, Void of Memory was completely made out of lasercut acrylic. I use 3D printing to create molds for pouring in silicone rubber. I don’t really have a preference, I view these methods as a means to an end, therefore the type of project I am working on determines what I use. However, I really like the freedom afforded by pouring silicone. I can make whatever shape I want and it is a great way to embed electronics in an object.

What have been some of your freelance projects?

One of my more recent freelance projects involves collaborating with a designer to embed technology in artisanal leather purses. I’m working on integrating wireless cellphone charging and maybe some GPS systems into the bags. It is quite exciting because the bags will be shown in Milan fashion week!

Tell me about your final project at Goldsmiths.

The final project for my MFA is a game called “Ghostboi in the Land of the Dead”. It involves using a ghost-shaped controller to manipulate the actions of a ghost in the afterlife. The game’s story is set in a parallel future to our own. The game, including the controller and the console, has been discovered in a pile of rubble dating back thirty years. The player is the first person to play the game in several decades. Ghostboi has been stuck in limbo, awaiting to find purpose in the afterlife for what feels like eons. He is super relieved to feel the player’s presence as they pick up the controller with their hands. He has been deprived of earthly experiences for so long, he is desperate to feel them again. Upon starting the game, the player controls Ghostboi on the screen with his earthly vestiges by moving his arms to float across the screen and pressing on his teeth to eat the Ghostburgers floating in the air. Ghostboi bursts into euphoric tears as he eats each burger. Cryptic text on the bottom of the screen provides hints as to what is going through Ghostboi’s mind. This is how it feels to be alive again.

When designing the controller and the physical enclosure, I wanted to capture the feelings of uneasiness, desperation, decrepitude, euphoria and playfulness which emerged within the story in the form of a physical object. Even more so, I wanted the player to experience these feelings as they picked up the controller, moved its limbs as they figured out how to use it, and controlled Ghostboi using his own body.

What are your plans for after graduation?

I would love to stick around London and keep working here. However, I’m keeping a pretty open mind about where I end up. I would like to end up somewhere that has a vibrant art and technology scene and lots of makerspaces and resources to make physical computing projects.

What advice would you give to someone entering art school?

What you do outside of the curriculum is just as important as the classes you take. It is really important to go and see exhibits, gallery openings and conferences and talk to other artists and practitioners. This is how you will find out about opportunities to show your work and learn about the themes shaping the current scene. Also, documentation is extremely important. Make sure you document your work well because most people will see your documentation and not your piece in person.

One comment on “Profiles in Art, Revisited: Julia Makivic”