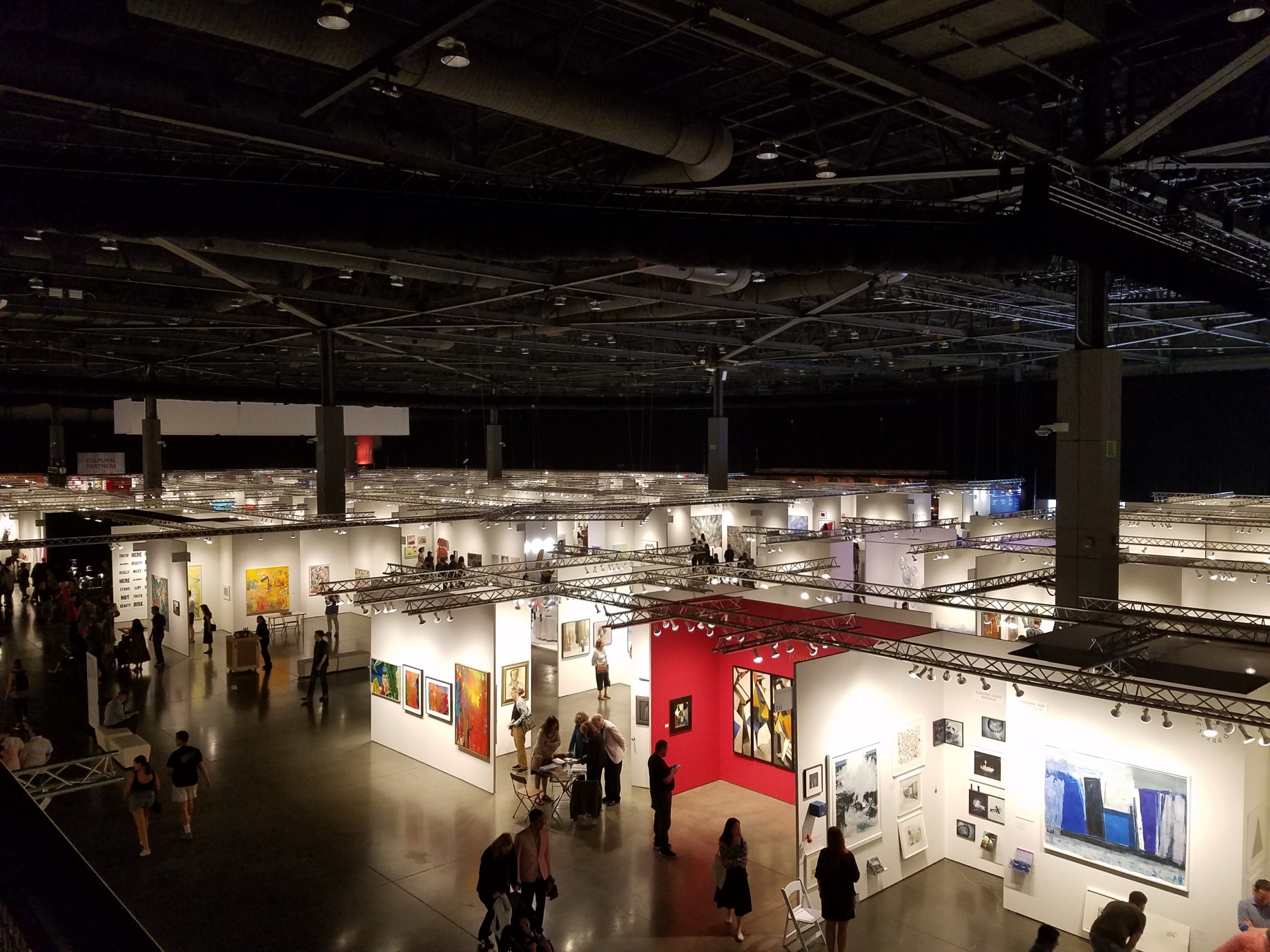 The first weekend of August the Seattle Art Fair gathered local artists, artists from across the country, and artists from across the globe.  Inspired by Art Basel and the Venice Biennale, Microsoft co-founder Paul Allen founded the fair in 2015 “with a goal to be a one-of-a-kind destination for the best in modern and contemporary art and a showcase of the thriving arts community in the Pacific Northwest.”  Attracting over 100 exhibitors and over 22,000 attendees over four days, the fair has so far gotten bigger each year.  I had never been before this year and wanted to experience it with completely fresh eyes without any preconceptions.  When I arrived at CenturlyLink Field Event Center, a 200,000 square-foot flexible event space adjacent to the Seahawks’ football stadium, I was stunned by the sheer scale of the event and how incredible was practically all the artwork.

For the volume and quality of the artwork presented there, the best way I can describe the fair is that it was a giant, pop-up museum.  Even the physical booth spaces looked like mini gallery spaces instead of the booths I had seen at the other smaller local arts fairs I attended earlier this summer.  After visiting this fair, in looking for attendance records for the fair, I found that the average cost of a booth was about $5,000-$6,000 its inaugural year.  The artists showing there were represented by galleries across the country and across the globe.  A majority of the galleries were from the United States, mostly from the Seattle area.  There were also galleries from Tokyo, Seoul, London, Canada, Russia, Copenhagen, Dublin, Spain, Taipei, Paris, Berlin, and Ho Chi Minh.

Going through the exhibitions, there seemed to be a lack of rhyme or reason to which galleries were next to each other, but this meant that just by turning in a circle or turning a corner you could travel the artistic globe.  There were paper guides to the fair upon entrance, and while I picked one up, I did not want to spend time reading through the guide when there was so much art to see.  So I set off, wandering happily, but in search of Seattle-area galleries to scope out potential collaborations.

The vast majority of the work there were paintings, but there were also prints, mixed media pieces, and some sculptures.  One of my favorite set of sculptures (and probably the most Instagram-able pieces) were large geometric structures with one-way mirrors and lights, created by Anthony James.  If you have ever been between two mirrors facing each other and observed how the reflections seem to go on almost endlessly, imagine that but compound the effects in octahedrons and dodecahedrons that make infinite complex internal light structures.

The paintings ran the gamut of style and subject matter.  There were hyper realistic portraits, landscapes, and even paint brushes and tools.  One set of paintings mixed realistic neoclassical portraits with surreal space/bike helmets.   Many others took a more impressionistic or ethereal, gauzy style.  Several others took a more pixel-inspired look.  Some had muted palettes with a focus on movement, and others were electric with color.  Many pieces chose the human form as their subject, and several went with pure abstraction.

Since it has been a while since I have made it out to an art museum, I was really inspired by a lot of the work I saw.  While I was drawn to some pieces much more than others, I appreciated that whether you were a collector or just there to enjoy and view the art, there was something there for everyone.  There was everything there from the beautiful to the disturbing, and from message-based to the straight-up cool.  It reminded me of the power of visual art to speak and experiment in a way nothing else can.  On a bit of a side note, I will say that the finds that shocked me the most were Picasso and Miro prints and Song dynasty paintings casually for sale at the fair, rather than carefully protected in a posh cosmopolitan auction hall.

Due to the sheer number of exhibits and time constraints, it was impossible for me to see everything.  But after viewing everything I was able to, I came away with a renewed sense of the value of creating art.  For a while now I have been struggling with being motivated to pick up my brushes and paints to create, so I think it was exactly what I needed to remind me what I love about being creative and painting.  While I went into the fair to see what it was like and hoping to scope out professional leads, I came away inspired by everyone else’s work there and with a new lofty goal—get my work shown at the Seattle Art Fair.