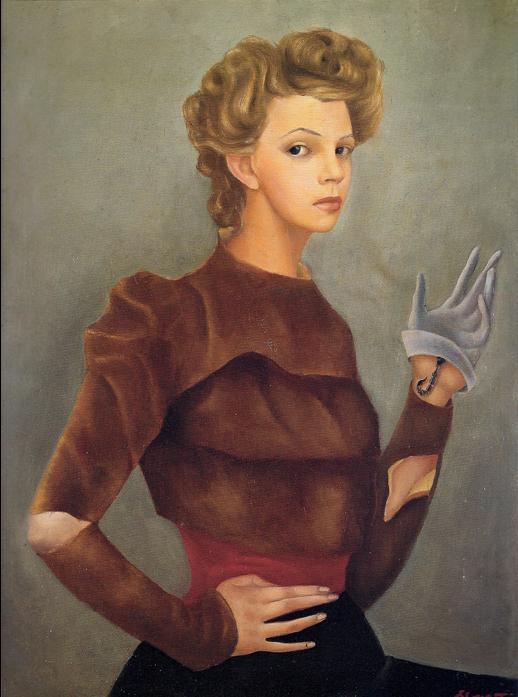 Looking for a Halloween costume: how about one of the women Surrealists?

For those of you who (like me) are inclined toward art and art history-themed costumes, you could say that Surrealism lends itself particularly well to Halloween. Surrealism was the prevailing artistic movement between the two World Wars, a reaction against the failure of reason and rationalism in modern culture. In the visual arts, literature, film, and music, the Surrealists believed in the primacy of the imagination, liberating the individual, thought, and language from the boundaries imposed by rationalism and society. Surrealist artists were interested in probing the subconscious, jettisoning reason in favor of expression, and creating strange and unsettling worlds in their work.

Like most art movements in history, Surrealism was dominated by male artists, and even today it is those artists who still receive the most attention: one is familiar with the big names like Salvador Dalí, Rene Magritte, Max Ernst, and Joan Miró, to name a few. But there were women artists who actively participated in or were associated with the Surrealist movement, who produced rich and varied works: fortunately, artists such as Leonora Carrington, Leonor Fini, Lee Miller, Dora Maar, Frida Kahlo, and Dorothea Tanning are being increasingly recognized in scholarship and museum exhibitions.

For my costume this year, I chose Leonor Fini (1907-1996), whose work I was unfamiliar with until I began looking for costume inspiration. The more I learned about her work and career, the more I realized what a fascinating and radical figure she was.

Born in Argentina but raised in Italy, Fini had ambitions to be an artist at a young age. She had no formal training as an artist, but learned from visits to museums and reading art books in her uncle’s library. She moved to Paris in the early 1930s and met many of the major artists in the city, including Dalí, Ernst, and Magritte.  However, she did not officially join the Surrealist movement movement: she preferred her independence as an artist to some of the confining attitudes shared by some of the movement’s other members (also, the founder, Andre Breton, was a rampant misogynist). In addition to painting, Fini was also an illustrator and designer, producing costumes and set designs for plays, ballets, and operas in Paris and abroad.

Although not a member of the movement and independent as an artist, Fini  engaged with Surrealist ideas in her paintings: she was known for her mystical and erotic representations of powerful women and hybrid woman-animal figures, like sphinx and chimera, often set in strange, dream-like landscapes. She eschewed convention in her personal life as she did in her art: she was known for her bohemian and eccentric lifestyle, her penchant for wearing fantastical costumes of her own creation, and living with multiple lovers and a lot of Persian cats. With her colorful and theatrical character, she was frequently photographed and often in the news. She once said, “I have always loved, and lived, my own theatre.”

2 comments on “Leonor Fini: Surrealist Painter and Queen of Costumes”