With another challenging year almost behind us, The Female Gaze team would like to wrap up 2021 on a positive note and share some of our favorite arts and culture content that we discovered this year. We hope you enjoy our recommendations below, and we wish you and your loved ones a restorative holiday season and a happy and healthy 2022.

I consumed a good amount of creative content over the summer before I started grad school in the fall. That led me to discover some new YouTube channels, television shows, and artists. Below are my favorite artistic things/artists I’ve discovered this year.

I’m always consuming art! I feel like I measure my life in the games I’m playing, the shows I’m watching, and the novels/comics I’m reading. Some of my favorite pieces of art that I discovered/rediscovered this year:

-NieR Replicant/Automata – My favorite video games of all time?!

-Undertale/Deltarune – One of the greatest indie games ever made, and plays around with the idea that game mechanics can have lasting consequences in a story.

-Carol Reed – A series of point and click murder mystery games that opened my eyes to the power of a limited budget. Sometimes all you need are some pictures of your hometown and a good story to make a great video game.

-Monster (Urasawa Naoki) – A gripping thriller set in post cold war Germany about a man chasing after a serial killer after saving his life when he (the serial killer) was a boy. It constantly emphasizes the importance of being kind to others.

-Demon Slayer/Kimetsu no Yaiba (Kyoharu Gotouge) – A story about a young boy whose entire family is killed by demons, save for his sister, who becomes a demon. The boy takes up slaying demons in a rush to save his sister from succumbing to her curse. It is the most popular piece of animated Japanese media right now, and rightfully so.

-Star Trek: Deep Space Nine – A show that really pushed the boundaries for what serialized television was capable of doing in the 1990s. Offered a dark, nuanced take on what was otherwise notorious for being a very sterilized, utopian universe.

-Succession – The greatest show on TV right now. A brilliantly written, shot, and acted satire of the uber wealthy that gracefully addresses the endless cycle of familial abuse and generational trauma as well.

-Gargoyles – An after school kids cartoon from the 90s about five gargoyles who were betrayed by humans in ancient Scotland and wake up a thousand years later in Manhattan in the late 1990s. It tackled interesting concepts and was shockingly diverse for the time period.

I received some great movie, TV, and video game recommendations from friends this year. Hayley recommended the first two, and Julia, who we’ve interviewed on the blog and who joined us for our first podcast discussion in September, recommended the last entry.

The Farewell (Released in theaters in 2019) – This film, primarily set in China, is about a family who has decided to keep an elderly relative’s terminal illness a secret from her. Awkwafina, who plays the role of the woman’s granddaughter, and who travels from New York to China to see her grandmother one last time, is torn by this decision. Nevertheless, her relatives urge her to keep the secret, stating that it is the selfless thing to do, while telling her grandmother that she is terminally ill would be selfish. Ethical dilemmas ensue, including a poignant exploration of American vs. Chinese attitudes towards death and dying.

The Chair (Netflix, 2021) – A tenured professor, Ji-Yoon Kim (played by Sandra Oh) is the first woman and person of color to become the chair of the English department at the fictional Pembroke University. Professor Kim attempts to modernize and update the school’s ways of working, which are still very stuck in the past, and attempts to mitigate the struggle between a progressive student body, and a primarily whitewashed, patriarchal administration. I feel that this series is an excellent commentary on the issues still presented by many “elite” colleges and universities.

Emily is Away Too (Available on Steam, released in 2017) – A lighthearted throwback to the 2000s world of AOL Instant Messenger. Via a series of instant messages, a teenage girl navigates her last year of high school, which is steeped in friend and relationship drama. While chatting on the fictional platform, the player is prompted to choose from a selection of dialogue, which lays the framework of the rest of the game, i.e., which friendships will last, and which will come to an end before college. Embedded in the game are many references to pop culture of that time, including top music hits, contemporary social media platforms, and viral YouTube videos, which will make any millennial laugh.

Since there are still COVID restrictions in place, I’ve felt more comfortable consuming art from the comfort of my home but I still feel like I managed to see a lot. Here are some of my favorites.

CinemaTherapy: Now granted, neither of these creators are female but I feel like the blend of technical/cinematic analysis and psychological analysis is absolutely fantastic.They cover a lot of popular films, I particularly like their Disney/Pixar videos though they cover many popular films from the 2000’s and 2010’s. Coco is the first video I started with (prepare to bawl your eyes out).

ModernGurlz: I found this channel mid-way through the year from their videos on TikTok aesthetics and stayed for the impeccable analysis on everything else. Also, I did not expect to get as roasted as I did for 2010s fashion but here’s hoping that my circle skirts and riding boots from college make a comeback at some point. *sobs in aging millennial*

Mina Le: We always stan an AAPI creator but in particular I really like that Mina tackles a wide range of topics, from trends in fashion history to reflections on why “French girl style” is aspirational.

Sky high NYC observatories (One World Observatory and The Edge NYC): a short trip to NY was one of the highlights of my summer and on this trip I got the chance to go to a couple observatories. I don’t think there’s anything I enjoy as much as spying on people and the city with a birds eye view. My main complaint was that it was crowded but I think that’s just how everything novel is in NYC. And while I do love street photography and a more “in the trenches” approach, I will never turn down the opportunity to see a panoramic view of the skyline.

Aggretsuko Season 4: One of my friends introduced me to this series back in 2019 and I’ve been hooked ever since. The show follows an anthropomorphic red panda who is a Japanese office worker. Her “secret” is that she uses death metal karaoke to decompress from her corporate job. I could write a full post about this season (and honestly, maybe I will) but for now, I will say that the series did not shy away from darker and more realistic topics, despite its very kawaii aesthetic.

Lore Olympus: a webtoon and modern-retelling of the Greek myth of Persephone. This is a really recent find (I binge-read all of the episode in the last couple of days) but I am absolutely obsessed. I always liked thinking about the myth of Persephone and while the gods in the original versions of Greek myths may seem one dimensional, these are complex characters and the plot of the story deals with contemporary issues head-on. Also, the art style is absolutely exquisite. It actually reminds me a lot of the original concept art of Frozen while simultaneously having some mid-century sensibilities. 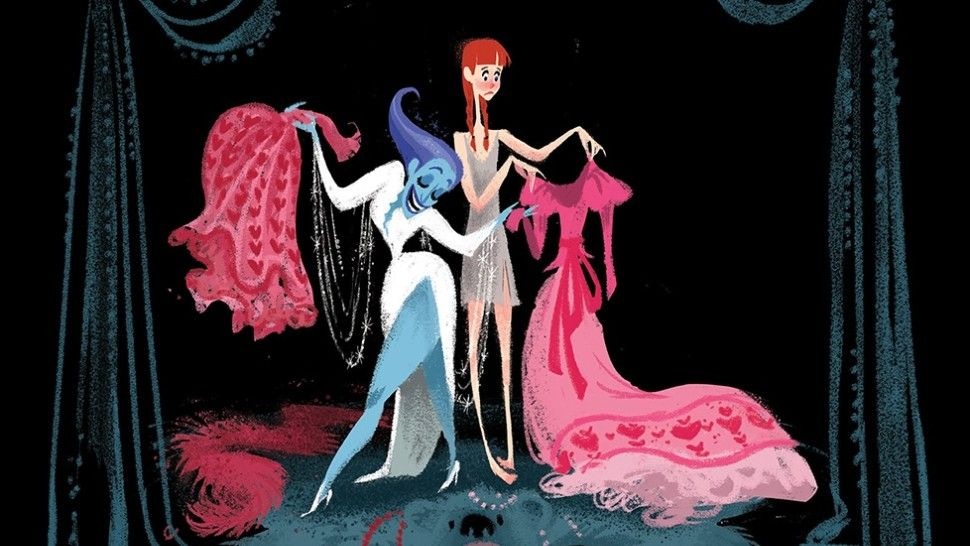 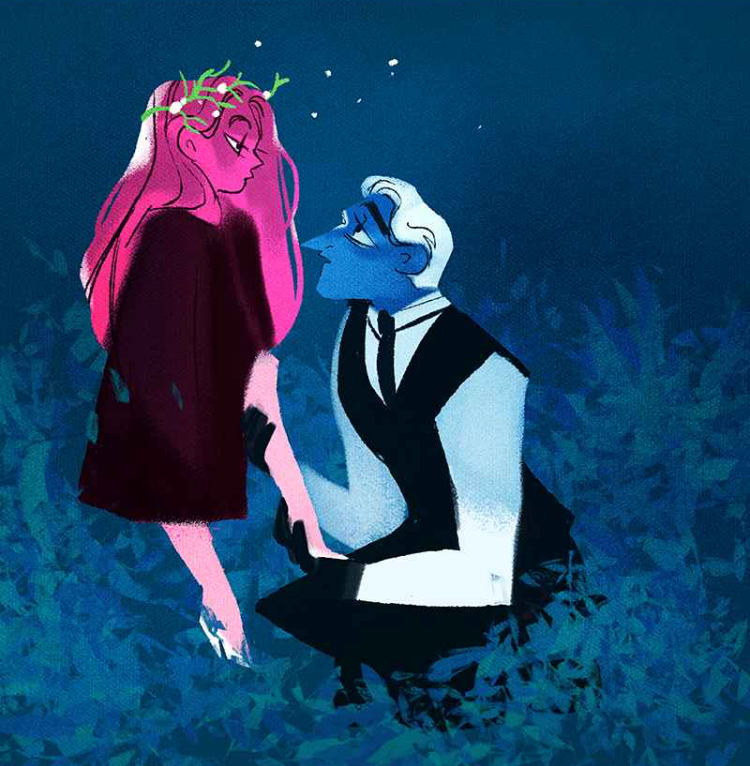 Time passes so strangely these days that it is hard to remember if the art that has struck me was from this year or not.  I have also been keeping busy, so I feel like I have not consumed much new media, so my list will be relatively short.

Summary:  Based on The Wheel of Time book series by Robert Jordan, finished by Brandon Sanderson, this epic fantasy show centers around a small group of young people, one of whom is prophesied to be the Dragon Reborn.  The Dragon Reborn will either save the world and carry it to a new age of Light, or join forces with the Dark One and destroy the world, throwing it into the Dark.

Why I love it:  It’s a classic epic fantasy of good versus evil, and I am a sucker for a good fantasy show or novel.  But the lines of what or who is good or evil get blurred, and things are not always as clear as they seem to be at first, which makes it very interesting to see what choices the characters make and how the story unfolds.  The visuals, though, are what I love most so far.  The art direction, the cinematography, and costumes are stunningly beautiful.  The costumes in particular tell a rich story on their own of the towns, societies, and cultures the characters embody and encounter.  As a show that uses threads and weaving as a continuing theme, I appreciate the attention to detail in the costumes even more.

Summary:  As the name implies, Final Fantasy VII Remake is a remake of the 1997 classic role-playing game Final Fantasy VII. Set in the dystopian city of Midgar, you play as Cloud Strife, an ex-soldier turned mercenary, who joins forces with a group called Avalanche.  Avalanche is fighting against the megacorporation Shinra, which rules the city.  Shinra is using the planet’s life-force as its source of energy to run the city and Avalanche is trying to stop them to protect the planet.

Why I love it: As a gamer, I have been hearing for a long time how Final Fantasy VII is such an amazing game, and widely regarded as among the best games ever made.  I was young enough when the original came out that I did not play it when it came out, and never had an opportunity to play it later.  I have managed to avoid spoilers for the story this entire time, so I am excited to be experiencing this story fresh for the first time, and a version of this story that is more fleshed out.  As well as a version with great up-to-date graphics.  This first installment definitely lived up to high expectations and  I cannot wait for the next part to come out so I can see where the story goes next.

Have you consumed any of our favorite media, or would you add something else to the list? Let us know in the comments!