Autumn is finally upon us! The leaves are changing, sweaters are being worn, and people are watching their favorite seasonal movies, but before there was When Harry Met Sally and It’s the Great Pumpkin, Charlie Brown, autumn was depicted through paintings. With its vibrant colors and moody weather, autumn has inspired artists for centuries. Below are some examples of how artists from each era had their own way of showcasing the picturesque season in a fascinating way. 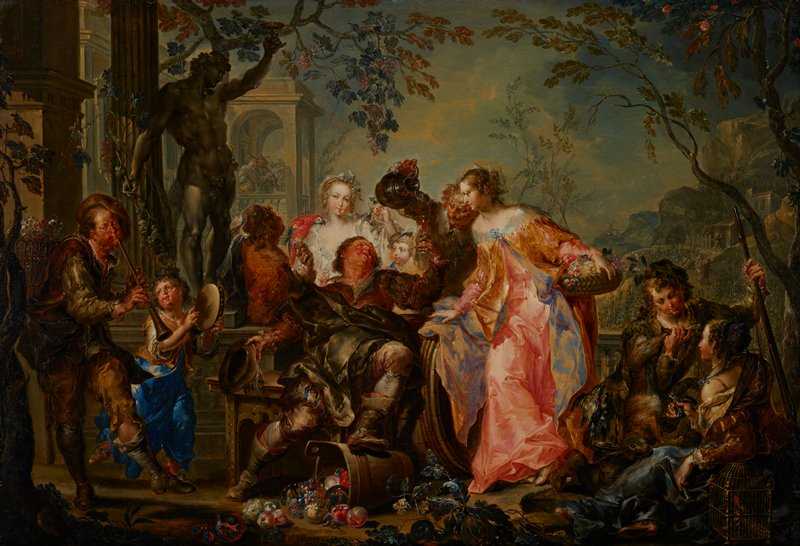 The Pleasures of the Seasons: Autumn, cir. 1730

This painting depicts Bacchus, the Roman god of wine, sharing in merriment with the humans around him. During this period, autumn was often associated with Bacchus because that was when grapes were harvested for wine. You can see that, by focusing on the reaction people had to the harvest instead of the actual action of harvesting the grapes, the Rococo era showcased seasons as a change in human nature rather than the change of actual nature.

This ukiyo-e print was created during a time when domestic travel was growing in popularity in Japan, so it made sense that Hokusai became inspired by his surroundings. While some paintings showcase fall via people relaxing in forests that are sprawling with reds, yellows, and oranges, or basking in the spoils of their grapes like in the Rococo era, that’s not everyone’s experience. Some people see fall as a time of hard field work, which is what Hokusai chose to depict while using the cool blues, greens, and dull yellow tones often associated with this era.

The Romantic period gave painters permission to go outside and paint landscapes that were supplemented by their emotions and imagination. You can see the vibrant colors are highly saturated in every part of this painting, causing the forest to look like it’s larger than life, thus engulfing the tiny men who are barely visible on the riverbank in the middle ground. This beautiful piece does a great job of magnifying the enchanting and lively feelings of fall.

This was a time when photography started to gain popularity, so painters chose to depict more realistic pictures that mimicked photos. This painting, while beautiful, is something that looks much more true to life than anything out of the romantic period. The proportions are normal and the colors aren’t as vibrant as they were in Moran’s painting. You can picture yourself as the painter, standing in this spot, looking at this scene in real life.

There’s a striking difference between Cassatt’s impressionist style and Brendekilde’s realism style of a woman sitting in the park during fall. Where Brendekilde added little of his own interpretation to his painting, Cassatt used the vibrant autumnal colors to blend the subject, her sister Lydia, in with the season that engulfs the blurred background. Cassatt, who was very outspoken about the sexism she encountered in her field, was often vilified by male critics for depicting vibrant colors and realistic female body types. It’s possible that having Lydia’s face stand in stark contrast to the rest of the piece, causing her identity to outshine her body, was a way for Cassatt to go against the industry’s norms. She also made her short, sporadic brush strokes visible, which gives the painting movement, and movement is a big part of fall.

The difference between this painting and his usual work (shown below) shows the range he had as an artist and how post-impressionism was interpreted on the individual level. The era was defined by emotional attachment to one’s subject and creating an abstract form. There is a clear impressionist influence with the short brush strokes and the landscape subject, but the darkness, defined figures, and his attachment to this scene (he sketched these 4 trees dozens of times) shows the transition into post-impressionism.

This was painted less than a year before he died, when he was staying in an asylum. It depicts a mulberry tree found in the garden of the asylum. The vibrant colors and wild movements within the painting could reflect his own instability at the time, and certainly shows how he reshaped his skills as a painter from his earlier work shown above. Autumn is a time for change, so it’s no surprise that he was inspired by a seasonal tree when he was trying to improve his mental state.

Tonalism was about painting misty landscapes with neutral hues. The underlying darkness in this painting and the use of shadows to define shapes shows a mix of the dullness of realism and the emotion of post-impressionism. Although the colors are warm, you can sense the cold autumn air through the underlying blacks and murky browns.

This painting was created during a unique time period where everyone was breaking away from any style that was considered normal. You can see how different this depiction of fall is compared to the past pieces. It’s all about this one woman with her elongated, curvy form in an ethereal setting full of autumnal colors and plants. It looks like it could be a tarot card in both its shape, subject, and the mystical feeling it relays.

Much like other paintings during the fauvism era, this depiction of fall rejects the artistic standards of it’s time by using intense color, thick lines, and a very flat perspective. You can see Van Gogh’s influence with the blurred wispiness of the trees and the myriad of contrasting colors. It feels more like a chaotic fall than the peaceful one seen during times like the romanticism era.

Known as the mother of American Modernism, O’Keeffe worked to depict matte, vibrant leaves that almost look like they’re animated. This close-up on the subject stands in stark contrast to the landscape paintings of the past and present eras. Her decision to focus solely on the leaves allows for a strong sense of detail as the colors flow from one to another. It truly provides an intimate view of fall.

There’s a clear difference between O’Keeffe’s and Belcourt’s modernist pieces. That’s because modernism encompasses a large range of styles that differ from artist to artist. Belcourt hints at the relationship between animals and the season, while all of the earlier paintings in this list focused on humans and trees, or trees alone. The juxtaposition between the vibrant red/orange of the leaves and the vibrant blue/green of the background allows for every detail in the trees to pop, and gives the sense of a river in a forest without actually showing one. The specs in the background create cohesion as they mirror the shape of the leaves. This also gives the painting movement, which is a staple in autumn.

Do you have any favorite autumnal paintings that didn’t make this list? Let us know in the comments!

2 comments on “Autumn Paintings Through the Eras”