In this series, I wish to examine three female characters in the HBO series Game of Thrones. In Westeros, castles are often used as examples of metonymy, standing in as representations of the family itself and their factions within the political sphere. These characters have at times embraced or eschewed their familial identities to suit their needs. We start this week with Sansa Stark and her (now) beloved Winterfell.

Sansa is the eldest surviving child of Ned and Catelyn Stark, the governing family in the North of Westeros and now heir to one of the Great Houses. I’ve actually been rooting for her since the end of the first season but her little sister Arya was much more the fan favorite (as the spunky action girl). Sansa began the show as a young girl who has been raised to be a traditional lady, learning such skills as embroidery and dress design. She was desperate to live out the romantic stories from her songs of finding true love and being the head of a household. Her only aspiration was to marry the prince, become Queen and bear the heirs to the throne. When she got betrothed to Prince Joffrey and sent to live in the royal court at Kings Landing, it seemed like this dream was almost fully realized. However, in her time in the capital, her fantasy becomes twisted as she becomes a prisoner in the Palace and of the Lannisters, her family’s rival. Sansa’s family’s fortune quickly turns and she finds herself at the mercy of the Royal Family for survival. Sansa survived several seasons in King’s Landing relatively unscathed because she had compartmentalized the loyalty and affection she had for her family to become a skilled courtier.

As a young woman from a respected house, she was much sought after as a potential bride but in reality she had few true allies and friends. Sansa certainly was not as skilled at the game of diplomacy and politics but did internalize enough to keep herself alive. She had an unfortunate marriage and fled the capital for one even more so. She returned briefly to Winterfell through marriage but had no real power or autonomy in the house. She flees again to be reunited (at last) with allies of the Stark family. At the end of Season 6, she delivered victory to her illegitimate “brother” Jon Snow by enlisting the help of the Nights of the Vale (both an ally and familial connection) and has reclaimed Winterfell and will begin season 7 acting as the de facto Lady of the North, with the Stark family back in control of Winterfell.

Winterfell is the ancestral home of the Starks in the North and Sansa’s childhood home. Michele Clapton, the show’s costume designer, described the overall aesthetic of the North to be “medieval England”.  The exterior shots have been filmed at Doune Castle (Scotland) as well as Castle Ward in Northern Ireland Winterfell is a walled fortress that is positioned on a sloping hill. There are many watch towers throughout the complex, including two which guard the main tall and heavy doors. Winterfell is somewhat reminiscent of the Romanesque style, built from a grey stone accented by dark wood.

Windows are few and far between, which is excellent from a defense standpoint but interiors become heavy and dark, lit only by candles and fireplaces. On the whole, Winterfell is practical rather than ornamental. The most decorative ornaments on the castle are carvings of the Stark sigil above archways. While they are exercise of power and identity, ultimately even they serve a functional purpose-to mark Winterfell as property of the Starks. Winterfell is weathered, rugged and intentionally rustic. There are no expensive imported artistic elements and one could easily mistake it for a hunting lodge, given the profusion of furs in every room. Winterfell is very much a structure in and of the land, made from stone quarried nearby and wood from local forests. Because of the North’s isolation, this makes logistical sense. The graphic designers noted that in creating a vernacular both for Winterfell but also Northern-style clothing, they tried to imagine what the Northerners would be able to create without external materials.

Winterfell has several notable features of interest. Immediately after entering through the main gates, the viewer enters a central courtyard which was our introduction to the Stark family and the North. In the season 1 pilot, this courtyard is where the boys practiced archery and the site of swordplay in flashbacks to generations of Starks past. The courtyard is visible from overhead balconies where Ned and Catelyn could monitor their son’s progress in archery. The courtyard was also where the Stark family first received the Royal Family on their journey North-ward. This is the primary access point to the forgeries and stables and is always depicted as a hub of activity. 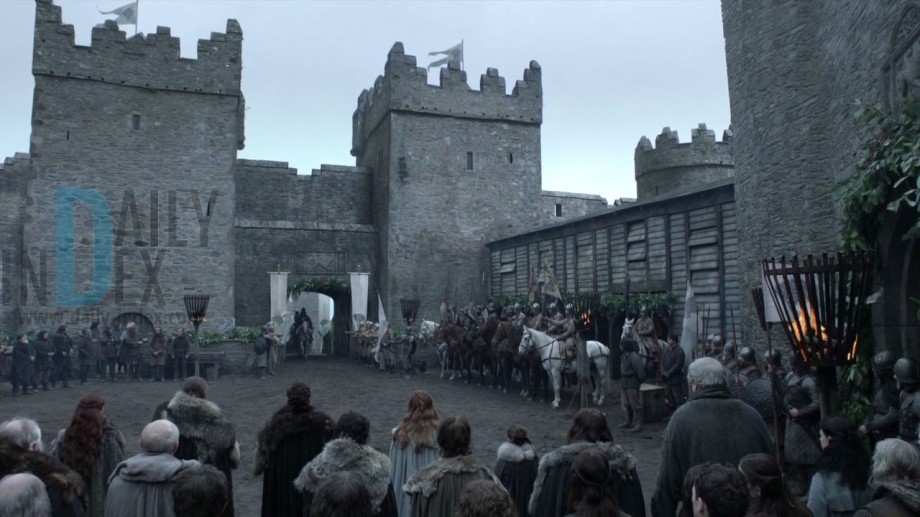 The Great Hall is first seen when the Starks entertain the Royal Family and where subsequent audiences are held both with other powerful families. For the Feast in Season 1, the head table is placed on a raised platform in front of a rare instance of decorative metalwork. During feasts and gatherings long tables would run perpendicular to the Head Table along the length of the room. It is in the Great Hall that entertainment-diplomacy is forged, through feasting and gathering together.

Perhaps Winterfell’s most iconic feature is the subterranean crypts. When Starks die, they are brought back home as evidenced by Lyanna Stark’s internment and the return of Ned Starks remains after season 1. Lining the narrow corridors are candles and stone effigies are erected for the deceased. In the book canon, the Stark children are known to play in the crypts but in the show it is always depicted as a space of reverence and remembrance. 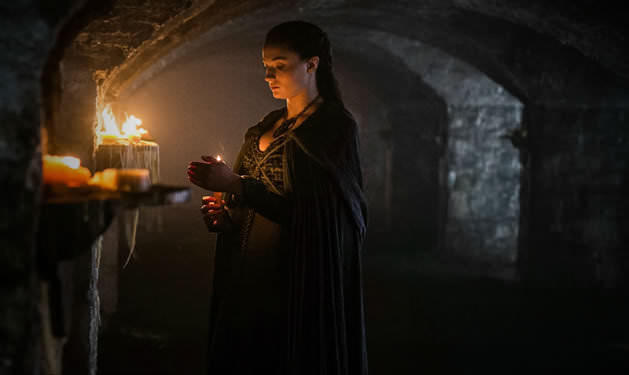 Sansa’s return to the North is incredibly bittersweet. While she is relieved to be out of the hands of the Lannisters in Kings Landing, she first returns to Winterfell with her married family (the Boltons) usurping the property. Even when she reclaims Winterfell for the Starks, it is inevitably different than when she was a child because now she sits where her parents once sat. Her circumstances are irreversibly changed compared to when she had left. Had everything gone according to plan, she would never have needed to return to Winterfell since she would have set up a home and family in another castle. But for Sansa and viewers alike, it is a relief to see her back at Winterfell.

In an earlier season, Sansa unconsciously builds a small model of Winterfell in the snow so it is obvious that she holds it in great affection as the site of many happy childhood memories. There is a saying that “There must always be a Stark at Winterfell” and for the first time in several seasons, this is finally true again (even if she is the only Stark left that she knows of). Interestingly, brides had hitherto been represented as taking on the mantle of their husband’s families but Sansa has been one notable exception. She was never referred to as Sansa Lannister and though Ramsay once referred to her as Lady Bolton in season 6, at the close of the season it is obvious that Sansa is and forever will be a Stark and her place is at her family home in the North.

As with any character, it is difficult to surmise whether they will make it through the end of the season but it is cathartic to know that Sansa made it back to Winterfell, even if she is not long for this world. Winterfell is the visual representation of the Stark identity and way of life, without artifice or pretension and steeped in generations of tradition and honor. At one point in her life, Sansa wanted nothing more than to leave the provincial North in favor for court life but her homecoming is symbolic that the Starks may yet endure.

5 comments on “Queens and their Castles: Sansa, Lady of Winterfell”