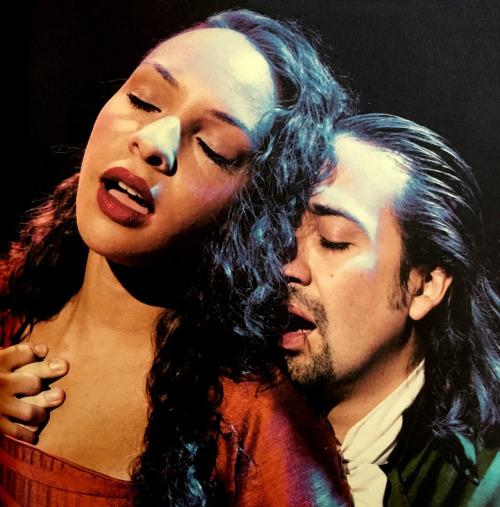 Alexander Hamilton’s life story, for all its drama, was always an unlikely source for a smash hit on Broadway. Hamilton favored rule by the elite in an already elitist society. He was adulterous, impulsive and privileged. But Lin-Manuel Miranda, like many musical theatre composers before him, saw in this unlikely source the chance to reform and reframe history. Using hip-hop and musical theatre, the show’s diverse cast took Chernow’s biography and made it speak to the New York they saw around them. Hamilton: An American Musical is a piece of art rather than historical scholarship. But even here, free from the confines of historical reality, the story’s women remain caged by tradition. Steeped in the gendered history of musical theatre and hip-hop, Hamilton fails to reflect the complexity and centrality of its women.

The Broadway stage has always been a dangerous place to be female. In the form’s fairly short history, rarely does a woman emerge happy and unscathed as the final curtain falls. Hamilton’s historical basis actually protects the show’s women from one of the form’s worst tropes: none of the ladies are martyred onstage. Even so, almost all of them are subjected to what theatre historian Stacy Wolf calls the “Eponine treatment.” Like the famous Les Misérables character, Miranda’s women are reduced from politicized activists to “sad girl[s] with a crush.” Writers get away with this because the structure of the musical exaggerates gender difference, both in musical style and plot function. Female and male choruses are separated. Duets between men and woman are reserved for romance. Pressed for time, creators rely on stereotypes and musical motifs to notify the audience what “type” of woman they’re encountering and how they should react. Rarely does a woman in a supporting role receive an introductory song like “Aaron Burr, Sir.” And when the woman’s story does become central, as with the current Broadway musical Waitress, abuse and pain are a quick path to the audience’s sympathy. As New York Times theatre critic Alexis Soloski recently put it, “Next season, I’d like to see women suffer a little less and run the world a little more.”

In the lives of Angelica and Eliza Schuyler, Miranda had historical proof of women who did just that. Hamilton has been largely praised in the press for its depiction of these women; the actresses playing them are confident, talented and intelligent. Even so, these qualities rarely translate into action. Wolf notes that this problem isn’t new. In musical theatre, women sing ballads that “trigger the men’s ethical struggles and bravery, but they don’t actually do anything. Instead, they emote, propelling others to action.” Whereas male characters like Aaron Burr engage with politics, fatherhood, war and romance, the women are merely commentators and reactors to Hamilton himself. They begin the show by speaking the line, “Me, I loved him,” and they rarely discuss anything else. We hear, over and over again, that Eliza and Maria Reynolds are “Helpless” in the face of Alexander’s affections. It’s a particularly troubling refrain for a musical that attempts to break down society’s social limitations.

Eliza’s sister Angelica fares only slightly better. Her song “Satisfied,” a parallel to “Helpless,” is a fantastic example of a woman “doing something.” But Angelica’s decision, like that of many musical theatre heroines before her, is to sacrifice her own happiness. She gets out of the way of our hero and his bride, propelling the action forward and generating sympathy through her own unhappiness. Her sacrifice was imagined entirely by Miranda, a shortcut to drama through female suffering. The real Angelica Schuyler Church had eloped years before she met Hamilton. But “Satisfied” packs a powerful emotional punch, and places Angelica squarely in the role of the unrequited lover. The men in Hamilton celebrate their successes as brothers. But the Schuyler sisters are pitted against each other, combative opposites vying for the limited pool of female joy. Onstage, it seems a woman can either be helpless or unhappy.

As the musical continues, it is Miranda’s simplistic treatment of Eliza that I find most disappointing. Bearing significant traces of Chernow’s angelic portrait, Eliza goes from helpless to truly powerless, begging her husband to “Stay alive. That would be enough.” The real Eliza Hamilton surely wished for more: a faithful, successful and more prudent partner, perhaps. Ignoring Eliza’s real-life role as a political aide and de facto publicist, Miranda allows only Angelica to make political commentary. The show, which relies heavily on the letters these real life individuals left behind, stumbles when it comes to an individual whose words have disappeared. Eliza is left to repeat a series of stock phrases, playing the worried and wronged wife. Even Eliza’s eleven-o’clock number, “Burn,” which allows her the agency of “erasing herself from the narrative,” fails to give us a nuanced portrait of a person in crisis. Eliza’s actions are symbolic, and her words are about Hamilton. I’m reminded of a gem of this year’s Broadway season, the play King Charles III. Co-opting the traditionally male soliloquy, playwright Mike Bartlett empowers a historically silenced political wife to reveal her unladylike ambition. If Kate Middleton can hold court on a Broadway stage, why not Eliza Hamilton?

Hamilton is a traditionally gendered musical, and its “revolutionary” hip-hop score carries with it another set of restrictive gender norms. What hip-hop scholar Michael Jeffries calls the genre’s “well-documented and inexcusable problems with sexism” are on full display here. None of the women in Hamilton rap, and the styles they do sing in reinforce their archetypes. Philippa Soo, who plays Eliza, is Chinese-American and sings almost exclusively in the style of the traditional Broadway ballad. Her songs align with audience expectations of her virginal character, as well as her light skin. Angelica, played by the African-American Renée Elise Goldsberry, performs with a dexterity reminiscent of Beyoncé, reinforcing her intelligence and her independence. Finally, Hamilton’s mistress Maria Reynolds is given an R&B song to narrate her “nocturnal adventures,” to borrow a phrase from Chernow. While it can be immensely useful to assign different musical styles to various characters, something Miranda does particularly well in Hamilton, it is worth noting the effect it has on our perception of the show’s women. The rigidly defined musical styles create a racial and gendered distinction that is familiar to both theatre and hip-hop fans. Why maintain it in Hamilton, a musical that breaks all the rules? While the male actors are given a range of musical styles to experiment with, to match the range of emotions they are asked to play, the women rarely get to show off their varied skillset. And while these male actors of color are now being considered as shoe-ins for a variety of future roles (Daveed Diggs as Harold Hill, suggested a recent tweet), the same suggestions are not being made for the actresses.

There is a reason that Miranda, and so many artists before him, aren’t pushing to move beyond female stereotypes: they sell tickets. Wolf writes, “These characters are readily available, always recognizable and appealing in their familiarity.” But their appeal is also dangerous. Hamilton is built around the idea that stories, rather than facts, are what matter. And just as the real Alexander Hamilton has been pigeonholed by those who outlived him, so too have the women who surrounded him. Despite its revolutionary advances, Hamilton shuns any woman who doesn’t fit into the neat boxes provided by history’s storytellers. We are never actually introduced to Sally Hemings or Theodosia Burr, both extraordinary women who are discussed but ultimately deemed too complicated for characterization. Musicals, like history, are overwhelmingly written by men. In this respect, Hamilton lies squarely within the norm.

In Hamilton, Lin-Manuel Miranda has opened up the Broadway stage to a slew of artists and audiences of color. For this, the show is rightly called revolutionary. But Miranda’s achievement should not leave us satisfied. Instead, it should launch the conversation about the possibilities of this extraordinary form. Hamilton allows us to imagine a past, and present, populated by extraordinary people of all backgrounds. We must begin to imagine some of those people as female. Miranda has accomplished the deeply impressive task of portraying a flawed, complex historical figure with affection, care and passion. I can only hope that his next project affords the same treatment to a woman. Angelica says it best: Lin, if you’re reading this, “include women in the sequel!”

tickets. She’s passionate about the way that history and the arts can help us see our lives differently. Particularly interested in the ways that public performances can showcase and effect change, she has written about race, gender and art throughout America’s history. When not writing, you might find her sitting on a museum floor or tweeting @ACarrintheWorld