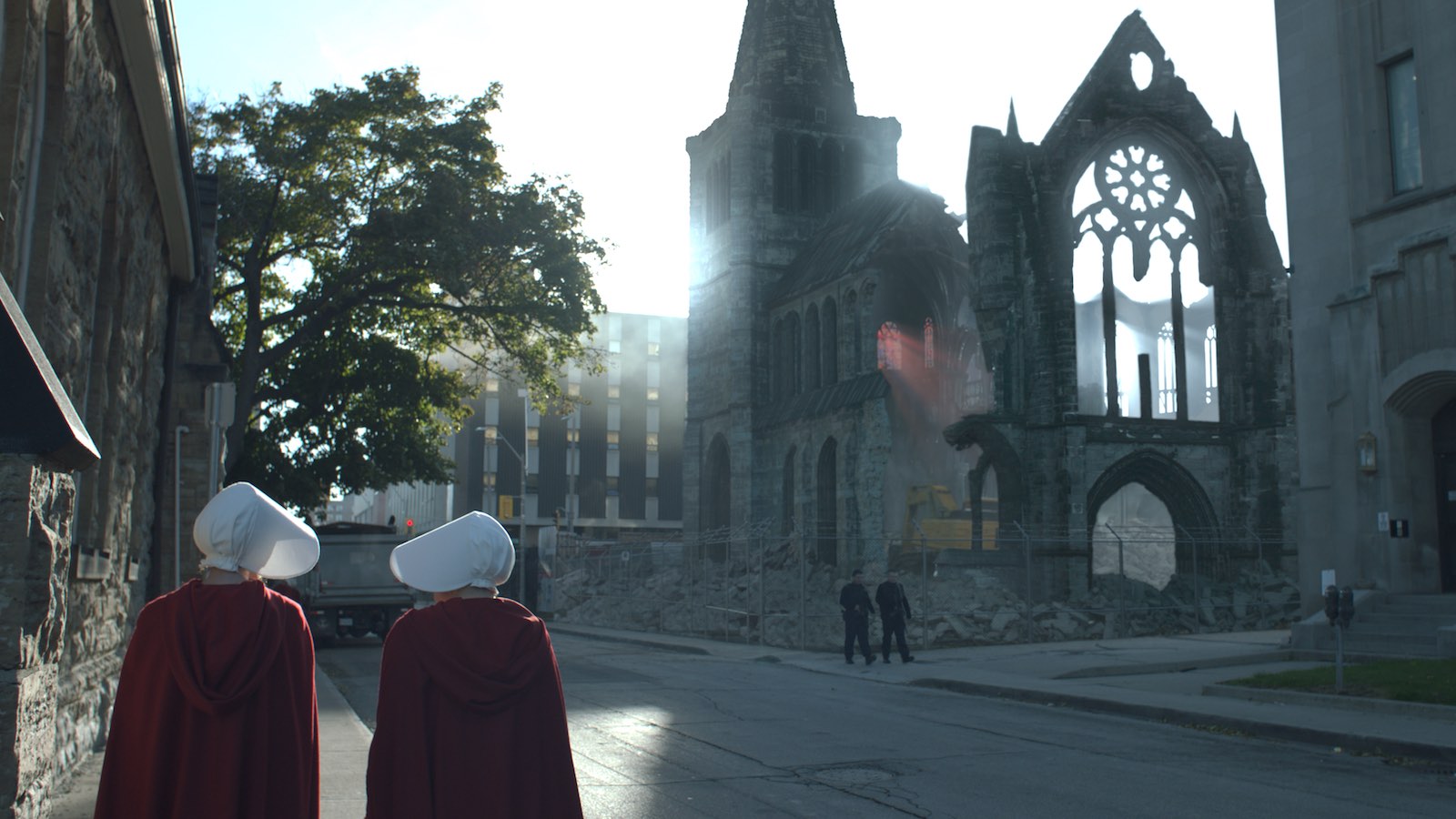 While Hulu’s The Handmaid’s Tale has captivated television audiences everywhere, it has a very special significance to Bostonians, since it is set here in our fair city. The Handmaid’s Tale is set in the non-distant future. Religious radicals have taken over the United States government, and Gilead, their punitive new “republic”, has risen from the ashes of what was formerly Cambridge, MA. We follow the story of Offred, formerly known as June, an editor who is now exploited by the republic and given the name of her commander, (of) Fred Waterford. Offred’s new role is to be a Handmaid, a form of sexual slavery in which she is expected to bear children for Fred and his wife, Serena Joy. Not only is she forced to undergo a ritualized sexual assault on a monthly basis, but many of the liberties we take for granted have been stripped away, such as reading, working, and even speaking since there are set greeting phrases that must be used in Gilead. The Handmaid’s Tale is meant to be a warning to all Americans about the dangers of losing our freedom. But for the smart and stubborn people who rally behind #BostonStrong, the series is particularly challenging to the notions of who we are.

It’s bizarre to experience an on-screen representation of Boston that is both familiar and grotesque. It’s exciting to see allusions to the city on screen, but it’s horrifying when we remember how the characters feel about it—nostalgic because it no longer exists. For the characters, their lives in Boston are like a dream from another life, so different from where they are now. The Boston I know fights for civil rights and equality but the theocracy of Gilead has stripped all but the most powerful of their freedoms.  Massachusetts was the first state to legalize gay marriage but homosexuality is a criminal offense in Gilead punishable by death. While Bostonians today march in protest of the executive Muslim ban, Gileadeans must practice in secret. But Gilead’s rigid social structure is not so outlandish, given Boston’s history. Massachusetts was founded as a Puritan colony, with very strict rules and regulations. Despite fleeing England for religious persecution, the settlers quickly set up incredibly rigid social structures and strict rules of conduct. Those who trespassed against those rules were ostracized and/or punished. As much as many Bostonians would like to think that this is a liberal intellectual hub, we cannot erase that fundamental part of our history.

In the first season of the show, , Boston, Cambridge, or our present day are  mere spectres, pieces of a shadow world shown in memory or in passing as the forbidden Place from Before.  We only see “Boston” or “Cambridge” in flashbacks or hear in spoken references to Alewife or the Back Bay. For the most part, the remnants of Boston and Cambridge are not shown on film, only alluded to in dialogue. Residents of Gilead are forbidden to speak of the time before (so many things are forbidden), so any mention of lives and places from before are repressed and mentioned in hushed, secretive tones. When Offred walks with a fellow Handmaid, they reminisce about a clothing store they pass, which used to be an amazing ice cream parlour. This conversation is an important bonding moment between the two, since they share a sense of longing for their previous lives but quickly have to move on, as Guardians prowl behind them, attempting to catch them in the act of any wrongdoing.

Film and television shows set in Boston often feature certain recognizable elements (like the skyline). But The Handmaid’s Tale regularly uses an a shallow depth of field, with only a sliver of the frame in focus (usually Offred’s face) and the rest of the scene left obscured and blurry. Without visual cues from the characters’ surroundings, we as viewers have access to a limited amount of information, which adds to the disorienting feeling of these scenes. But even without familiar images of Beacon Hill or the Zakim Bridge, the first season contained enough allusions to the Bostonian past to create a sense of horror and connection with the characters, even while they were ultimately is not essential for advancing the storyline.The violent premise of the show itself was so shocking that even these mere mentions were off-putting. For those of us who had not read the book, it might have been especially upsetting to consider such atrocities occur so close to home. For some, this was enough to make them not want to watch the show further.

Season Two makes a radical departure from this approach, by being much more explicit with its allusions to the place Gilead used to be before the takeover. Perhaps the creators realized they needed to use a different tactic, because we the audience are already familiar with the horrors of what happens to people (specifically women) in Gilead. Enter the ruined Boston, which  we view as though we are seeing an apocalypse that has passed. In the first , Fenway Park is the scene of public “un-hanging” of the  Handmaids. After an act of defiance against the regime, Offred and the other Handmaids are shoved into the back of windowless vans. They are driven to an unknown location and forced to run down a long corridor which opens up to the abandoned stadium. Amongst the tumbleweeds and unkempt grass, the  Handmaids are led up to a mass scaffold for what they presume is to be a mass hanging. When the ground ultimately only drops an inch, it is revealed that this was all a tactic to scare the women without bringing them bodily harm, since they are a valuable commodity. It is unclear why this location (a stadium with no audience) was chosen specifically, but it is the first allusion of the season to a recognizable Bostonian landmark.

Later, once liberated, Offred spends her time in waiting to flee to Canada at the former headquarters of the Boston Globe. A writer herself, Offred walks through the abandoned offices of this Bostonian powerhouse publication and quickly becomes aware that this was a site of mass murder. The walls are blood-stained and littered with bullets. A line of nooses hangs beneath a balcony in the print office. This was the part that hit most close to home for me. Offred spends some time looking into a cubicle of one of the slain journalists. A writer and mom just like Offred, her cubicle full of pictures with her family. When I watched this scene, my stomach dropped because this could easily be my cubicle full of pictures with my family. In the first part of Season Two, the writers of the show have made a very deliberate effort to connect the show to our present, to make us really empathize with the victims of the Gileadean regime and remind us that the new norms were not always so. 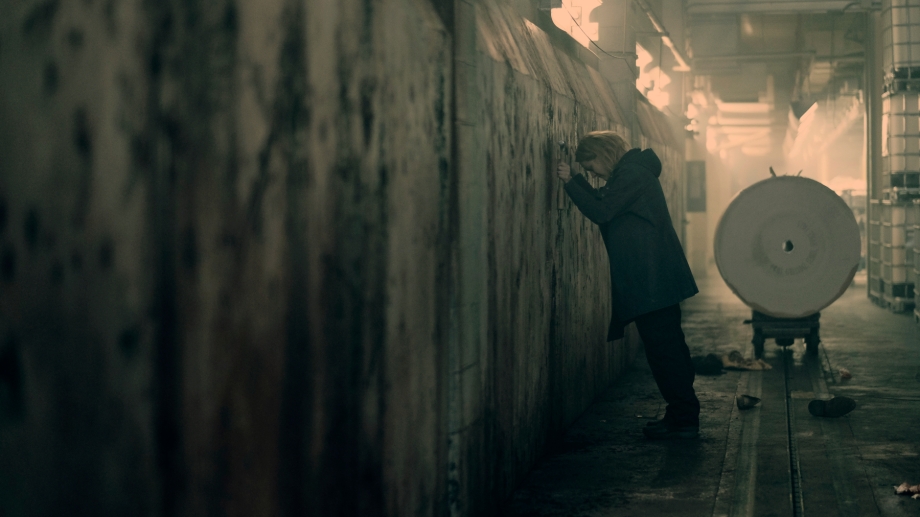 Offred returns to Gilead later in the season, but it doesn’t feel exactly like it did in Season One. Once she is back to manicured pathways guarded by menacing figures in all-black and omnipresent Victorian-style houses , though no road signs or unique landmarks to denote that they are in New England specifically. Although we are still learning about Boston from character conversations, it is more intimate than the previous season. Serena Joy and Offred apparently shared a favorite brunch place, Marigolds, which served amazing pancakes. Offred ventures to ask Serena Joy whether she misses writing. Offred muses that in another life they could have been colleagues, as opposed to oppressor and oppressed. Another unusual moment comes when a male physician tells a female physician-turned-maid that he is so excited to meet her; she had trained his mentor actually and they met briefly at a 2012 medical conference (we have many of those in the city every year). In that moment I couldn’t decide if I wanted to scream or cry at the injustice that a great medical mind had been squandered in that way. In that episode, the skills that the women had cultivated in their previous lives took center stage though the gender status quo was restored shortly thereafter. In Season Two, we get a brief glimpse of what has become of our landmarks in the coup and can feel an acute sense of loss that sustains through the season as we see that the past creep out, for Wives, Handmaids and Marthas alike.

To anyone from Boston, it’s pretty obvious that this is not filmed in Boston (it is actually filmed in Toronto). You will not see Handmaids strolling through Beacon Hill, in the North End, or in the wreckage of Government Center. But frankly, it doesn’t matter. The specificity of Boston, the tangible symbolic city rather than just “former America,” demands our collective attention and in particular the attention of Bostonians appreciative of this progressive city .  To have this narrative set in the city that brought forth the American Revolution is a poignant reminder of everything that could be lost if we are not careful.

The creators of the show need to strike a difficult balance with the show’s tone; they need to convey both urgency and horror, but judiciously. Swing to one extreme and the disgusted audience will no longer want to watch, swing the other and they are bored and complacent. Creating the sense of place in both Gilead and Boston is an important aspect of that storytelling. In Season One, the very concept of Gilead’s social hierarchy, rituals, and violence are horrifying enough that the story establishes the show as transgressive.  Even the mere mention of the past places in Boston is enough to nauseate. But in Season Two, when the audience has become familiar with the violence, it becomes necessary to be explicit about who these characters were and where they came from. Showing June in the wreckage of Fenway Park and The Boston Globe headquarters is a way to remind the audience that what she and the other Handmaids are experiencing is not so removed from our world. It is surreal to see the country we recognize descend into such darkness.

The Handmaid’s Tale is captivating, because it illustrates our greatest fear as Americans—the fall of our democracy. We Bostonians pride ourselves on being a city of culture and progress, but this show forces us to reconsider how we think of the city and remember our beginnings. In watching Gilead, one can’t help but hope that it will fail, because if it succeeds, it almost feels like a personal failing. Although it is a beautiful, cinematic show,  it represents the most ugly, intolerant, and violent actions that can be (have been) taken against women. Seeing this system succeed feels like a very personal failing.The show has been oddly prescient in addressing issues like the diplomatic relations with Canada,  the separation of families, and even the assassination of journalists, portraying the worst-case scenarios. It’s easy to get bogged down in the heavy material the show covers, but we should take heart that this show has become such a cultural phenomenon and is engaging people by making these issues feel so personal. It is as though it is everyone’s collective responsibility to make sure that these horrible things do not come to pass. Other shows today, such as Westworld or Game of Thrones, have the same amount (if not more) violence and gore, but The Handmaid’s Tale shakes us to our core. The other shows are so removed from our everyday experience that it is not difficult to compartmentalize it. But this show overlaps so poignantly with the issues we are tackling with as a nation today that it is jarring, and you can not look away.