Last Sunday, I had the privilege of seeing “Public Parks, Private Gardens: from Paris to Provence” at the Metropolitan Museum of Art in New York City. “Public Parks, Private Gardens” is on view until July 29, 2018, from 10 AM to 5:30 PM on Sundays through Thursdays, and from 10 AM to 9 PM on Fridays and Saturdays. The exhibit is entirely devoted to the Impressionists’ relationship with horticulture, and how they depicted these subjects in their elaborate paintings. Three specific reasons convinced me to attend: I love everything about the Impressionists and their work, the intersection of horticulture and art is an exciting, new topic that I have not yet had much exposure to, and I hoped that attending would help initiate beautiful spring weather, which has been quite fickle in the Northeast recently.

I navigated the galleries in the Met’s Rotunda, which is a beautiful space illuminated by a domed window, and which was appropriately decorated with verdant plants.

I also appreciated the interdisciplinary approach that the curators took in making the space come to life. A video of Claude Monet painting in his garden in Giverny, France in 1915 greeted me warmly, and also made the paintings feel like living, breathing entities. I appreciated the multitude of representations of plant life present throughout the galleries: next to the painted depictions, I could compare maps showing parks and gardens, scientific drawings of plants, and even cases featuring horticultural tools from the nineteenth century. By the end of my visit, I was able to identify three reasons why plant life became an important subject for the Impressionists to depict. Horticulture and outdoor scenery had an increasing importance in European Impressionist paintings due to importation of exotic plants, the newfound interest in developing gardens and green spaces, and the growth of the leisurely lifestyle of the middle class, which the Impressionist artists also partook in. 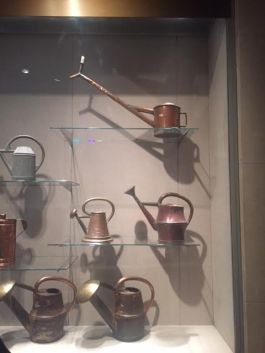 During the latter half of the nineteenth century, exotic plants became an important subject. Trade with countries like South Africa, present-day Iran, and Japan was apparent, as plants from these regions started appearing on Impressionist canvases. A prime example is shown in Monet’s The Path Through the Irises. which is a depiction of the iris patches he planted in his Giverny garden. In order to impart their beauty and attract the viewer’s eye, Monet painted many varieties of irises in close proximity to one another (per “The Path Through the Irises” wall text). One of the iris varieties present was Iris Kaempferi, a species native to Japan; their presence in his garden evidences the connection between the two countries (per “The Path Through the Irises” wall text).

In the Impressionists’ era, there was also a growing importance placed on developing green spaces for public enjoyment. After the French Revolution ended in 1799, more people started going to parks; a pastime that belonged only to the rich was now available to everyone. Recognizing this growing need for public parks, and the dirty and cramped effects imparted by large urban spaces, emperor Napoleon III, Baron Hausmann, and engineer Adolphe Alphand undertook an “urban renewal plan” which swept the whole country (Per “Parks for the Public” wall text). This undertaking saw the development of multiple parks and green spaces throughout France, which included the installment of a park at each of France’s cardinal points, and the placement of trees to line the main avenue in Paris, the Champs-Élysées. In 1870 alone, the acreage of parks in France increased from 47 to 4,500, and by this time, 2,300 varieties of plants had been introduced to the country.

The latter half of the nineteenth century was also marked by the growth of the French middle class, which occurred after the end of the French Revolution. In addition to the mass cultivation of public green spaces, backyard gardens were also becoming popular, specifically on middle class properties (per “Portraits in the Garden” wall text). With that, a new genre of portraiture emerged: paintings of the middle class in their gardens, leisurely enjoying the natural elements (per “Portraits in the Garden” wall text). These paintings were undoubtedly Impressionist, as artists went outside, or en plein air, to seek inspiration. Instead of depicting subjects in an artificial environment like a studio, artists were now interested in reflecting people performing everyday tasks in a less formal environment. Following the genre of Impressionism, many of these paintings sought to capture an instantaneous moment that could not be created again (per “Portraits in the Garden” wall text). Artists would often depict relaxed, un-posed figures, specific patterns of light and shadow, and objects cut off by the edge of the canvas, all reinforcing the idea of a temporary moment in time.

A painting that captures these qualities well is The Monet Family in their Garden at Argenteuil, by French Impressionist artist Édouard Manet. The painting depicts Claude Monet and his family at leisure in their private garden. The painting evidences the en plein air technique, as it was painted outdoors in one specific moment in time rather than in a controlled environment like a studio. Reinforcing this decision is the addition of chickens at the left of the composition, as their poses are unique to the moment the artist captured them. Chickens were commonly owned by families of that time, which emphasizes the idea that the Monet family is going about their everyday life (per “The Monet Family” wall text). Additionally, Monet, his wife Camille, and his son Jean are shown enjoying the outdoors. Specifically, Monet is depicted while tending to the garden, which is a beautiful meta-commentary on the subject of gardens and middle class life in the latter half of the nineteenth century (per “The Monet Family” wall text). Furthermore, none of the figures look posed; Monet’s wife and son lounge languidly on the grass, while Monet is bent over in a specific, contorted way. Once again, their poses reinforce the idea that the family is going about their daily life in a singular moment in time (per “The Monet Family” wall text).

As with any craze, the gardening and horticulture fad also invited its fair share of caricature. Artist Honoré Daumier would often publish captioned lithographs in contemporary journals. Two of my favorites are depicted below. One presents a comedic view of a couple who has just taken up the hobby of gardening, and is thankful for their house for providing them shade from the sun:

The other features a man and a woman contemplating a marble statue in a public park, and remarking on its beauty:

These depictions functioned to amuse their readers, and also to provide a useful commentary on that time, one still studied and enjoyed by audiences today.

“Public Parks, Private Gardens” was an enthralling and memorable experience, and an ideal way to (FINALLY) welcome spring. Through this exhibit, I was able to learn about the plant life depicted in Impressionist paintings, the growth of the middle class and green spaces throughout France, and the importance of leisure to this population. All in all, the galleries offered an interdisciplinary, multimedia, and comprehensive view of the important topic of horticulture and art in nineteenth century France.

One comment on “The Intersection of Impressionism and Horticulture: My Visit to “Public Parks, Private Gardens” at the Met”