In the shadows of the setting sun, a petite pavilion was a small spot of unadorned tranquility standing proudly under the Barcelona flag.Upon ascending the hill of Montjuic, we almost missed the small building tucked away under more traditionally Spanish-looking buildings. If you are not an architecture nerd, it would be easy to see it only accidentally while seeing the Palau Nacional or the Magic Fountains (the more high-throughput tourist attractions) or to miss this site entirely.

Constructed in 1929 by German architect, Mies Van der Rohe, this structure was supposed to represent the new German Weimar Republic on the global stage. Despite this, the name ‘Barcelona Pavilion’ has endured, likely due to the fact that it was built for the World Exposition hosted by the city. Neither the name nor the pavilion itself were ever meant to be permanent so what currently stands on the site is a reconstruction of the original constructed by Catalan architects in the 1980s.

I had seen this structure so many times in class, first in introductory courses and then later as I wanted to learn more about architecture. It’s a wonderful specimen of  capital-M Modern architecture  and more specifically the beginning of the International Style. In fact, my professor had walked us through that exact path through pictures, so I should have known exactly what to expect.

But being there was different.

Visitors enter the pavilion through a wide and shallow steps, forcing you to pause and consider the building and large reflective pool in your short ascent. This set of stairs is constructed out of a beige-colored Roman travertine which is in stark contrast to the other colors in the pavilion. The structure is one story tall with a white plane roof that seems to extend away from you ad infinitum. The space between inside and outside is somewhat blurred as floor-to-ceiling windows give viewers direct visual access into the interior and huge proportions where you would expect there to be more windows are actually fully open to the elements. This is disorienting but also prompts visitors to take their time to carefully consider where there are and are not walls and windows. As you turn to the right and enter the threshold, there is a magnificent red marble wall on your left and the space otherwise enclosed on all remaining sides by windows. The striations in four pieces of red-colored golden onyx form a beautiful, diamond-like geometry.

Unlike everything else we had seen on the trip so far, there is actually very little inside the pavilion because the minimalist architecture was really the main attraction. There was no furniture except two iconic beige chairs and matching ottomans, which had been designed specifically for the Pavilion and bear the city’s name. The furniture is set on a black carpet that occupies approximately 85% of the space from your original vantage point at the threshold.

As you make your way counterclockwise through the space, you come upon the second reflecting pool at the back of the pavilion. In the far left corner of this pool is a reconstruction of the bronze sculpture Dawn by Georg Kolbe. This area of the Pavilion is decidedly darker, as the base of this pool is a dark-colored stone and the backdrop for the sculpture is a magnificently patterned grey stone.

As you continue counterclockwise back towards the front of the Pavilion and look forward, you will be greeted by a long tunnel-like space. Chrome-covered cruciform columns line the left side of this space and while this space begins with a wall on your right side, it tapers off to reveal that you are, in fact, back on the outside of the Pavilion. Around the frontal reflecting pool are benches, should you wish to sit and contemplate the serenity of the space around you.

Modern architecture is always portrayed as grandiose, but I was surprised at how intimate this space felt. It was odd to see it in real life— feeling how warm it was in Barcelona, seeing sunlight dapple through trees nearby. In textbooks, modern architecture looks  pristine almost to the point of being sterile-freed from the constraints of space, time, and weather. But frankly, I could not even imagine the pavilion during a New England winter. 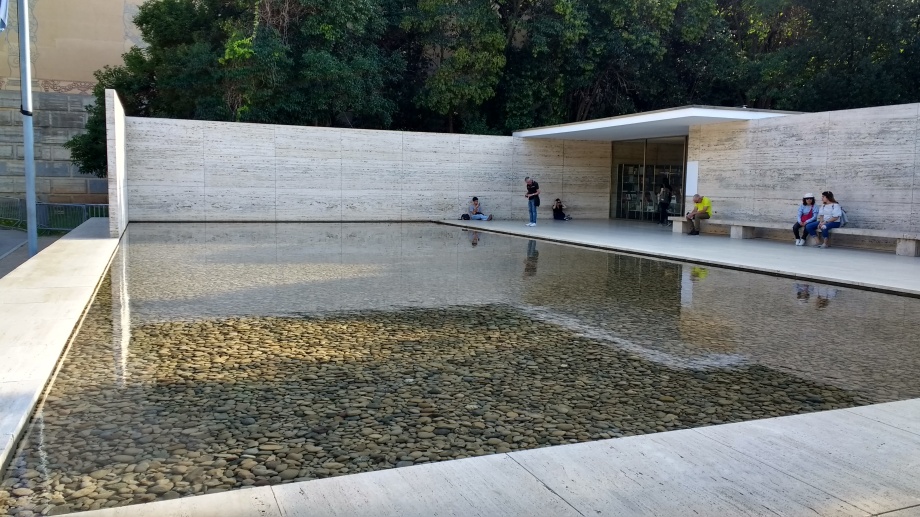 We had seen a spectacular Baroque church the day before and we had been getting used to the bright colors and ornate sculpture and moldings of many of the other buildings we saw. In all those other spaces I also felt like there were moments of cognitive dissonance since all the historic sites we’d seen on the trip were filled to the brim with artifacts and bursting with color. By contrast, this serene little space seemed at first somewhat underwhelming.

But while the Barcelona Pavilion looked austere compared to its Spanish neighbors, the pavilion was already quite flamboyant compared to other Modernist buildings (and even other buildings by Mies himself!). One of the central tenets of Modern Architecture, as outlined by Le Corbusier, was that truly pure architecture was free from adornment. The pavilion, however, was awash in different hues with light bouncing off the chrome columns.  While Mies would later adhere to that doctrine more rigidly in his later works (such as the Farnsworth House) this space made an artistic use of materials to create a unique spatial experience. The use of a beige travertine allows the Barcelona Pavilion to maintain a certain degree of visual cohesion with its neighbors, similarly warm-toned buildings. The unique use of color and the intrinsic decorative properties of the natural materials sets it apart from International Style buildings of the following decades.

It was a special experience getting to see a Modernist building in Europe, the birthplace of the movement that would radically change architecture forever.

One comment on “Tiny, Beautiful, Pavilion: Visiting Mies in Barcelona”