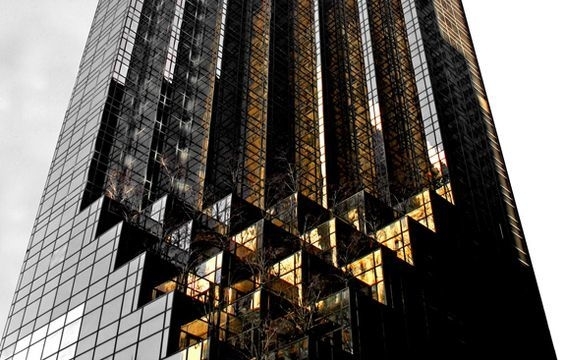 My first lesson in architecture was that buildings are built by those with money and power. This is a thought that I am sure comforts and flatters Donald Trump immensely, as he seems to think of himself as a powerful man and he has built a lot of buildings.

Standing at 725 5th Avenue, Trump Tower in Manhattan was the first skyscraper that Donald Trump ever commissioned.  At the tender age of 33, Trump acquired the plot with intention of building the city’s “first super luxury high-rise”. The tower now serves as  a mixed-use space, housing office, retail, and residential spaces, as well as serving most recently as the headquarters of the Trump campaign.

If this were a normal architectural dissection, I would give you all the  nuts and bolts of the 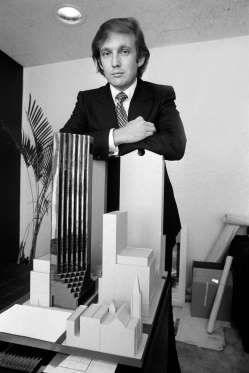 building, both figurative and literal. For example, Trump Tower was built in 1979 with construction completed in 1983. The tower was designed by Der Scutt for Poor Swanke Hayden & Connell Architects, and its site was  formerly occupied by the Bonwit Teller building, a notable Art Deco skyscraper. Standing at 58 stories total (though the top floor is oddly marked 68 in a turn of false advertising), the first 5 floors are used for a spacious public atrium that has been hailed as one of the most pleasant lobbies in the city. While the use of glass and metal for the overall structure falls in line with previous skyscrapers dating back to the 1960’s, the jagged tiered corner with its trees blooming out of the industrial materials is indeed a novelty, an unusual blend of the organic and inorganic in the bustling metropolis.

But this is not one of my regular posts.

Instead, I want to draw your attention to the person behind the Tower and what he did to build it.

Often we forget that the buildings we see were created by people–the patron, the architect, the construction workers. We tend to focus on the long-term glory and impact of buildings, and these seemingly banal personal details are usually relegated to the footnotes of history. But I would argue that personal narratives give us perspective on grand structures and ground our otherwise  lofty academic discussions . Considering the motivations of all parties involved gives us an interesting lens to consider buildings as the creations of people, instead of pristine and timeless structures.

Trump destroyed priceless pieces of Art Deco objects on the building he demolished–after promising them to the Metropolitan Museum of Art. The Bonwit Teller building that previously occupied the lot served as the flagship store of the women’s  clothing retailer. A once-formidable clothing company at the turn of the century, the brand was on the verge of bankruptcy when Donald Trump acquired the property on which to build his first tower. He had, however, promised that prior to demolition he would remove and donate several pieces of the ornate decorations on the exterior of the building to the Metropolitan Museum . These included limestone relief sculptures of semi-nude goddesses as well as an ornate grille that hung above the entrance of the building; collectively, the pieces were valued at over $200,000.

But they never made it to the Met-they were destroyed on the site with jackhammers, the grille turned into scrap metal. This was decried many times over by prominent members of the Manhattan art crowd, but of course, nothing could be done to salvage the sculptures after the fact. The Trump Organization ‘played dumb’ at first, pretending they simply did not know where the sculptures were. They then issued a statement that the destruction of the sculptures was for public safety, claiming that they might have hit pedestrians walking underfoot. But it then came to light that Donald Trump himself had ordered the destruction of the sculptures, (which he called ‘junk’ unlike the decor of his new Hyatt Hotel)  casting himself as an arbiter of style and reneging on promises because it was  personally advantageous.

It is easy to be offended by Trump because of his racist, misogynist, Islamophobic viewpoints, but I argue that we should also be offended on behalf of the preservation of our past through art, as well as on behalf of basic human decency. It is true that, objectively, Trump Tower’s  design was novel and aesthetically interesting for its time. It could be considered a sleek homage to Postmodernism. But armed with the knowledge of its inception, it is hard to see it as anything but metaphorically hollow–it was built on deceit. And this is not even to mention his maneuvering of zoning laws and exploitation of immigrant workers.

Trump broke his promise to the Metropolitan Museum by destroying irreplaceable artifacts of the moment in Manhattan’s history when it became a global, industrial metropolis. He looked the other way while immigrant workers endured absolutely deplorable conditions so that his tower could be built. While most would make it a priority to preserve culture, he was willfully defiant of anything that did not serve his interests, promises be damned, and retrospectively tried to minimize responsibility. Taken as a sum, these indicate a wholly unsavory, unreliable, and completely unethical character.

Simply put, this is a man who looks out for himself and only himself, which is obvious even when he was younger and perhaps at his most vulnerable as he ascended the ranks of bureaucracy. For many, the preservation of art would be sacrosanct. But altruism, like many words, is simply not in his vocabulary.

So what is there to convince you that he would (or even could) do anything different now?