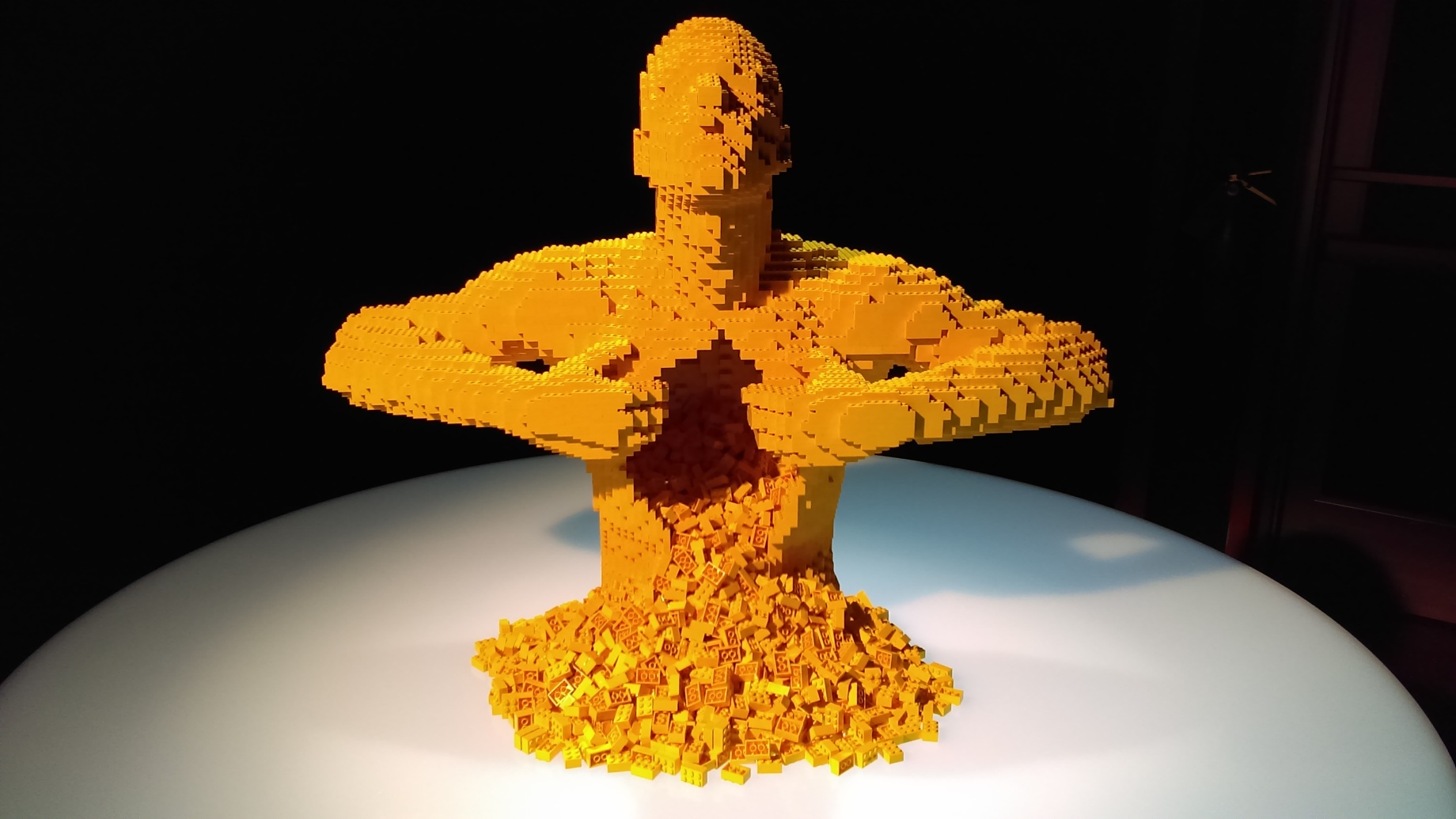 Too expansive to be housed in the Seattle Art Museum, “The Art of the Brick” is being shown in Seattle at the Pacific Science Center.  The exhibit opened May 28th and will be on view until September 11, 2016.  As the Science Center advertises, CNN named it one of the top ten “Global Must-See Exhibitions” back in 2011, and it is easy to see why.  The artist, Nathan Sawaya, turns the medium of a child’s toy, Legos, into an inspiring experience with his work.

In its iteration at the Pacific Science Center, “The Art of the Brick” has nine areas, with each area having a room or two.  When you first enter the exhibit, the Science Center staff lets you in in groups so you can watch a short video introducing Nathan Sawaya and his work, explaining how the artist quit his law career to create art with Lego bricks.  After this, the first area, “Paint by Brick,” presents a number of works recreating extremely famous paintings from art history.  I was immediately impressed by how obviously well-versed Sawaya is in art history, and how well he translated the pieces into his Lego versions.  Even if the viewer is not as knowledgeable about art history, there are plenty of recognizable reproductions—the Mona Lisa, a Rembrandt self-portrait, Vermeer’s “Girl With a Pearl Earring,” Van Gogh’s “Starry Night,” and Hokusai’s “Great Wave,” among the most recognizable.  Not only did he faithfully represent the details in the original works, but also included three dimensionality in some of them that provides an enhanced sense of depth.  The second room of the “Paint by Brick” area takes this even further and makes the subjects of the paintings fully three dimensional sculptural elements, beginning with the farmer and his wife in “American Gothic” and including the lovers in Klimt’s “The Kiss.”

“The Sculpture Garden” is the next area and over its two rooms presents famous sculptures, mostly Greek and Roman, like “Diskobolos,” “Nike of Samothrace,” and “Venus de Milo.”  It also covers a wider swathe of time and cultures by including works such as the bust of Nefertiti, a terracotta warrior, the “Queen Mother Pendant Mask: Iyoba” from Nigeria, and Michelangelo’s “David.”

With these first four rooms, you are impressed by the ability of the artist to translate other works with Lego bricks, and how well he makes it work.  The inherent pixelation of these translations is particularly apt for the digital age we are in, since it modernizes the works in a form with which we are very familiar.  So, to further help bring history to you, the labels for these works are primarily geared towards education.  While a little long, they explain the original work, a little of why they are influential, and Sawaya’s process and thoughts for his Lego translations.  Just as important as their educational component, these art history pieces also function to get you used to the idea of Legos as a serious art medium.  So, by the time you get to the third area, you are ready for the shift that occurs.

The third area, “The Artist’s Studio,” marks a thematic shift into Sawaya’s entirely original work, and the tone of the exhibit alters correspondingly.  The wall labels are no longer long explanations.  They are instead a sentence or two of the artist speaking directly to you.  Sometimes they give a little bit of Sawaya’s thoughts, and sometimes they are a direct appeal or call to action.  Of course the works themselves change as well.  As a transition room, “The Artist’s Studio” is similar to a traditional artist practicing and honing their skills with sketches.  It is in the next room, “Metamorphosis,” where Sawaya’s original work begins to get serious.

Throughout the exhibit there are large quotes from the artist on the walls, and the “Metamorphosis” room has one of my favorites: “Art makes better humans, art is necessary in understanding the world and art makes people happy.  Undeniably, art is not optional.”  That quote, along with the piece “Hands,” which depicts a figure with its hands crumbled away, in that room really resonated with me as an artist.  Just like Nathan Sawaya, I fear the loss of the use of my hands, since that would take away my ability to create art.  Also, as someone not very far out from school and unsure of what route to take, I question the feasibility of pursuing art as a career.  Sawaya’s own story of being unfulfilled in his career as a lawyer, then choosing to make the leap into art so he could be fulfilled, despite everyone else doubting the move, and his conviction of the importance of art is undeniably inspiring.

The next area, “The Human Condition,” extends the theme from “Metamorphosis” and continues to be even more inspirational to viewers.  This room hit me more on a personal level.  Sawaya’s work here touches on diversity, human potential, the struggles we encounter, and the ability of the human spirit to overcome those struggles.  With the work and his accompanying words, Sawaya encourages you to find your inner strength and live to your full potential with love and kindness towards others.

Following this room is one with a full T-rex skeleton, made to appeal to children, and to the inner child in adults.  After this the room, the next area, “Through The Darkness,” takes a slightly more somber turn, greeting you with skulls.  The first room of this area also features a figure barely holding on to a ledge with its fingertips, another holding a mask before its face, and another trying to break free from behind a wall.  The second room of the area, while still serious with a figure trapped in a box and  another breaking free from hands holding it back, has one piece in particular that lightens the mood a little again, “Ascension.”  Sawaya asks in the wall text, “What will lift you up?  Love?  Faith?  And once you are raised up, where is it you will go?”  Nathan Sawaya is not afraid to touch on the fears, doubts, and struggles we encounter in life with his Lego brick art, but he always takes the opportunity to point out the light at the end of the tunnel as well.

The second to last area, “In Pieces,” shows some of the work produced in collaboration with photographer Dean West.  While very successful, interesting pieces on their own, after coming through the journey Sawaya’s work took me through, I was a bit less impacted by it than I might otherwise have been had I seen “In Pieces” on its own.  Logically it does not fit anywhere else in the exhibit, but emotionally it feels slightly out of place.

The final area of the exhibit on the ramp out is called “Your Gallery” and includes a work made specifically for its stay at the Pacific Science Center, “Be Different.”  With its subject of salmon, it is particularly fitting for the Pacific Northwest, and the one rainbow-colored salmon turning to swim the opposite direction gives a clear message.  The very last pieces in the exhibit are striking duo-chromatic portraits of his partner and wife, Courtney, and are a sweet way to end the show.

To anyone who is going to be in Seattle before the exhibit closes on September 11th or if it travels to a city near you, I could not more highly recommend seeing Nathan Sawaya’s Lego brick art.  I went expecting to see art that is fun and novel, but his work was so much more than that.  It was an inspiring experience to me as an artist and a person.  While the medium makes it easily digestible for children and adults alike, do yourself a favor and read the labels for more than just the brick count.  Reading the text along with viewing the work makes Sawaya’s artist statement increasingly clear and provides you with a one-on-one dialogue with the artist.  Nathan Sawaya’s brick art takes you on an intimate journey and leaves you inspired, uplifted, and enriched.