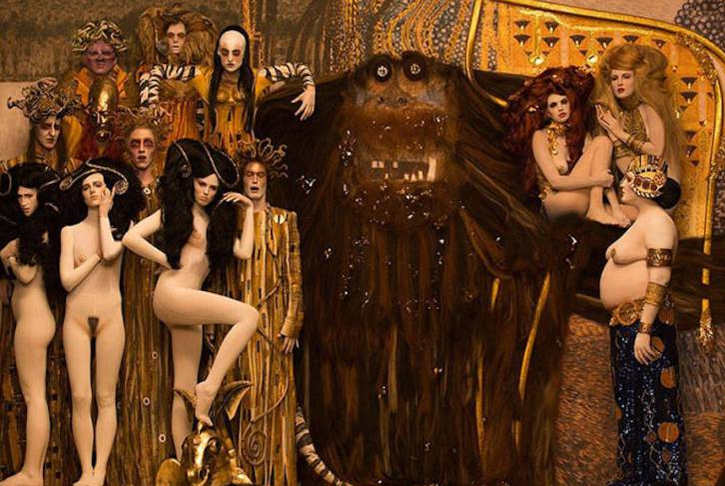 Before I opened this article, I was skeptical because the Artnet News Facebook page described it as “Your favorite Klimt paintings, transformed into high-end fashion photography.”  High-end fashion photography tends to either be trendy and chic or ridiculous and overdone.  However, upon opening the link and seeing Inge Prader’s photographs in comparison with the paintings, I was impressed.

I have seen a number of the Klimt paintings these photographs recreate in person, so I can tell that not only are the photographs accurate reproductions to the form of the source material, but they also have the same atmospheric feel to them.  But while they are a faithful homage to Klimt, they have a life of their own as well.  That spark of their own, in conjunction with such strong art historical ties, is what impressed me the most about the work.

That realization about the photographs made me think of the phrase “good artists steal and bad artists copy.”  For the untrained eye, however, knowing the extent of the meaning of this phrase and being able to identify it in practice can be difficult.

First, let us examine the phrase itself “good artists steal and bad artists copy.”  Does it mean that good artists literally steal others’ work and pass it off as their own?  Absolutely not.  That would be extreme plagiarism, and as we all know, plagiarism is never something one should do.  So, what are good artists stealing from other artists then?  They are not stealing the form of the artwork, but the ideas behind it and in it.  In other words, artists are inspired by the work of other artists.

What does this inspiration look like in practice?  One obvious example we already have established are Inge Prader’s work that translates Klimt’s paintings into photography.  He has taken Klimt’s ideas and transformed it in another medium.  In Prader’s translation from painting to photograph, he has made the work his own.

But if artists are allowed to riff on art history, what qualifies as a bad artist merely copying?  A good example of this is the contemporary artist Mr. Brainwash.  While there are rumors that Mr. Brainwash is an elaborate hoax created by Banksy, the portrayal of Mr. Brainwash in the film Exit Through the Gift Shop is the perfect example of a bad artist copying other artists.  In the film, it becomes clear that Mr. Brainwash copies and recombines the forms found in the work of street artists like Banksy and Shepard Fairey without truly understanding the message of the original work or fully knowing what his own work is saying.  Mr. Brainwash does not understand the source material or the commentary his own work might put forward.  As such, it becomes a hollow rehashing of what has already been produced.

So, copying is much more superficial than stealing inspiration.  To steal an idea and make good work from it, an artist must first truly understand the source.  Next, she must make the idea her own by bringing something new to it.  Bad artists who copy what has come before add nothing to the discourse art conducts with itself, while good artists add a new, meaningful voice to the conversation.