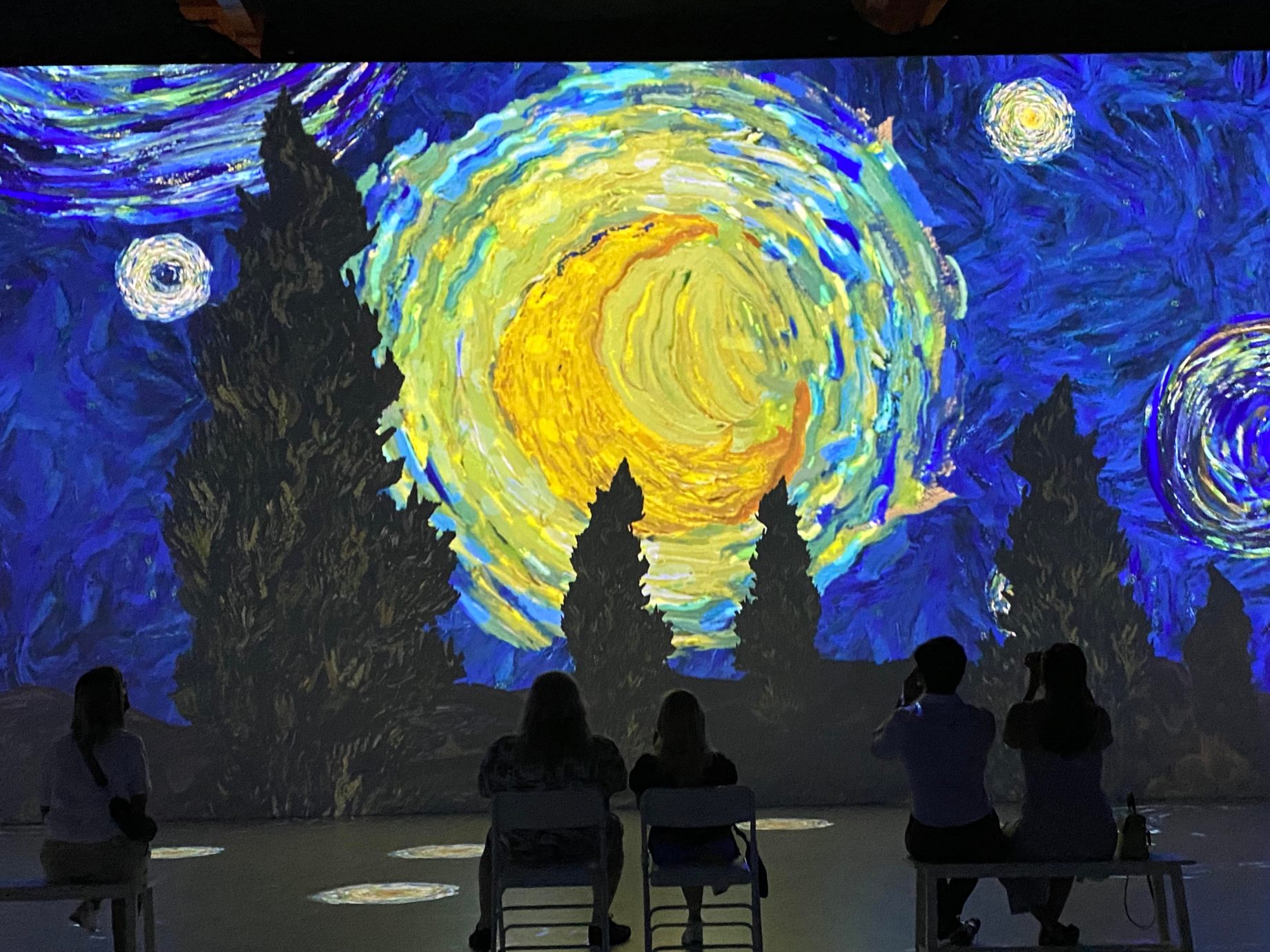 As a follow-up to my blog post published a couple of weeks ago, 4 Art Experiences to Explore in New York this Summer, I decided to visit the Immersive Van Gogh exhibit located at Pier 36. The experience is comprised of a twenty-minute video with audio, projected on a massive scale throughout 75,000 square feet of exhibition space, featuring sequences that take the viewer through Van Gogh’s life and work. Immersive Van Gogh has been engineered by renowned composer Luca Longobardi and digital artist Massimiliano Siccardi, and is currently traveling all throughout the United States, as well as internationally. The exhibition has been very well-advertised and has received rave reviews, so I wanted to see if the installation truly lived up to its expectations. While I appreciated the homage paid to the artist and the music juxtaposed with the massive projections of the works of art, I found the layout to be dizzying, and lacking key context that we would have needed to fully appreciate the artist’s oeuvre.

One aspect that I did appreciate was the usage of music to accompany the works of art. Pieces such as Mussorgsky’s Pictures at an Exhibition and the Bach Cello Suites were used to bring the projections to life. A sunny wheat field was shown alongside the audio of Je Ne Regrette Rien by Edith Piaf; the bright, loud quality of the music brought out the shining yellow in the painting. A rhythmic drum beat provided the background for iris flowers growing and bursting through the soil to reveal colorful blooms, and a frenetic track came through the speakers to underscore the artist’s iconic nightlife scenes. Each piece of music felt appropriate to the works being projected, and helped bring them to life.

While the music and images complemented each other well, I found the viewing experience to be disorganized. It was unclear that the same video was playing in each of the rooms that the exhibition comprised. If a friend had not told me and my group to go directly to the larger room in the back, which had the best experience, I likely would not have done so. Additionally, the field of view for the projections was much too wide. From where I was sitting, there was no option to view the video from further back, so I had to look too far to the left and right to see the whole projection, which was inconvenient from a viewing perspective. Furthermore, I found the layout of the exhibit to be disorienting. The video was very dark at times, which made it difficult for me to find my way in and out of the exhibit, and I always felt like I was going to trip over someone since audience members were strewn throughout the space. The lights and sound emanating from the projection were extremely bright and loud, which made me quite dizzy at the start of the video. There were also a variety of silver sculptural forms installed all throughout the space; I was unclear on how they were supposed to contribute to the exhibit, until I read later that they were specifically designed in order to break up the space, and to reflect and distort the images on the screen to create another dimension to viewing the exhibition. Honestly, I’m happy that I did not try to view the video through the lens of the silver sculptures, because I did not need the images to be more distorted. I was dizzy enough already.

Additionally, the exhibit would have greatly benefited from being more academically focused. Further context would certainly have helped the viewer to learn more about the artist’s life and paintings. For example, the entryway to the main exhibition space had five straightforward facts about Van Gogh (for example, he died when he was thirty-eight, and only one painting sold in his lifetime for $2,000), but none of these facts were integrated in the video. As an art historian, I have studied Van Gogh’s life and work in depth, and am very familiar with his movements and works of art, but there were parts of this exhibit that puzzled me, and I wasn’t sure why certain elements were included. For example, there was a French phrase at the beginning, presumably something from one of the artist’s letters, but the video did not elucidate this further. At the very start of the video, there was also an animation of three cicadas, but this was not explained either. After further research of my own, I learned that Van Gogh had portrayed cicadas in an ink on paper drawing, but in the context of the video, it was unclear as to why they were there. Furthermore, the projection started and ended with Van Gogh wearing a hat with dwindling candles perched atop it. By the end, the candles had stopped burning, perhaps to signify his turbulent life and untimely death. Upon further investigation of this motif, I learned that there is a myth that the artist painted wearing a hat with candles, but it does not seem to be rooted in any truth. I was dismayed to realize that an exhibit dedicated to Van Gogh’s life and work would perpetuate a falsehood such as this one.

Overall, I would have preferred the exhibit to have more of a traditional museum-style layout, with singular, smaller projections of the artist’s paintings, perhaps with animations on a smaller scale. These could be accompanied by thematic explanations to educate and display the different parts of the artist’s life. This would have been more useful to me; no matter how much I know about an artist and their time period, I always appreciate going to museums to learn something new. This exhibition did not provide an opportunity to do that, but I wonder, because of the current pandemic, if the objective was to provide a more relaxing, outdoor concert-style environment, and less of a factual lesson. Maybe people want an atmosphere where they gather and enjoy a collective experience (albeit six feet apart), without the necessity of deep analysis. That approach did not work for me personally, because I always want to reflect and learn something new, especially if the experience involves art. However, given the international success of Immersive Van Gogh, it is clear that people have enjoyed the exhibition. I suppose we all want to connect with each other during this time, and maybe we do not want to enter a state of deep reflection over every shared experience. I completely understand that appeal, but I think for my next art-historical outing, I will choose a different type of exhibit.