Daenerys of House Targaryen, first of her name, the last in this series and with far too many titles for me to include in the title of this piece.

Daenerys was born at Dragonstone Castle but has never actually seen it until now, in the penultimate season of the show.  She was spirited away in the night with her brother Viserys after her mother died in childbirth. The Targaryen siblings sailed together across the narrow sea to the island of Essos. Daenerys spent her childhood being bounced around between the houses of her family’s allies, without ever really having a stable home of her own. In season 1, she was introduced to us as a political pawn of her older brother Viserys to forge an alliance with the Dothraki so that he could use their power to return to Westeros and assume the throne. Throughout the seasons, Daenerys has been one of the few characters who has a purpose other than simply surviving or enacting revenge. While she was trying to obtain support in Mereen, she was actually concerned with learning how to be a good ruler in these “foreign kingdoms”. Daenerys seemed to be mostly driven by feeling entitled to the Iron Throne as her Targaryen birthright and motivated by a need to re-claim it and rule over the Seven Kingdoms. Now that she has assembled her all-star squad (and her dragons, of course), she began her journey back to Westeros with the hopes of taking the Iron Throne. But rather than conduct a siege of King’s Landing immediately, Daenerys directs her newly obtained fleet to Dragonstone, the ancestral seat of the Targaryen dynasty.

In the episode entitled Dragonstone, Daenerys arrives to Dragonstone island with her new fleet after ending the previous season dramatically staring off into the distance. They arrive on a beach and begin their ascent up the cliffs to the castle itself. Along the way, we are treated to some truly spectacular seaside shots as well as wide-angle shots of the party walking along a narrow ridge, somewhat reminiscent of a dragon’s spine. I could be incorrect about this, but this is one of the few times the show has employed this type of tactic to increase suspense for the arrival. Without encountering a single soldier or inhabitant, Daenerys arrives at the massive and heavy gates of the castle, flanked by two colossal stone-carved dragon heads, to get her first close-up views of her ancestral home.

Perched atop high cliffs on an eponymous island, Dragonstone Castle is situated off the east coast of Westeros, across Blackwater Bay. The castle is isolated and thus well fortified so Jaime Lannister notes that the deep waters near the castle make it good location in which to dock ships. The production team chose Gaztelugatxe, a Spanish island as their filming location of choice for the exterior shots and built a set for the interior shots (based in Dublin, Ireland). In Spain, there were naturally-occurring rock formations that caught the team’s eye and artisans used these as inspiration for structural elements inside of the castle. Additionally, the island in canon has the abundant natural resource of sitting on top of dragon glass which becomes an important bargaining chip in Daenerys securing the North.

Traditionally, Dragonstone had been the home of the Heir to the Throne, while the regent lived in King’s Landing (how fitting then that Dany should land there while Cersei resides in the Red Keep). Dragonstone is interesting because it allows us to see what the architecture of fallen power looks like when redeemed. In some respects, Dragonstone is our only view into seeing what the Targaryen family was before their untimely demise. It is a rare opportunity that we as the viewers get to see Dany rediscovering the Targaryen world as well. This season was the first time that we saw a Targaryen at Dragonstone…because it was the first time a Targaryen was a Dragonstone since Dany herself was spirited away into the night two decades prior.

If Winterfell is rough-hewn and natural and the Red Keep is impeccably crafted, Dragonstone falls somewhere in between. We as viewers are supposed to get the impression that this fortress is both of the rock and on top of the rock. Considering that the Targaryens derived their power from the (natural) resources that are their dragons, it seems fitting that their castle would be designed in this way. The castle itself has many strong angular wings jutting off from the center of the fortress, mimicking the irregularities in the rock formations on the island itself. It was evidently carved from Valyrian stone techniques which have long since been forgotten. (As an aside, ‘Valyrian’ always seems to be synonymous with long-lost craftsmanship/engineering/materials of the highest and rarest quality so it is a poetic and somewhat tragic descriptor for anything regarding the Targaryen dynasty).

Throne Room: This was a new room created for this season. The throne room is somewhat reminiscent of a cathedral, as the room has an immeasurably high ceiling and is largely processional towards the thrones. The walls of the throne room mimic the natural rock formations of the island, with deeply carved striations drawing the eye upwards.  Triangles, an allusion to the three-headed dragon of the Targaryen sigil, feature prominently. The throne itself forms a triangle and is framed by a large triangular window, the only somewhat delicate form in this entire castle. 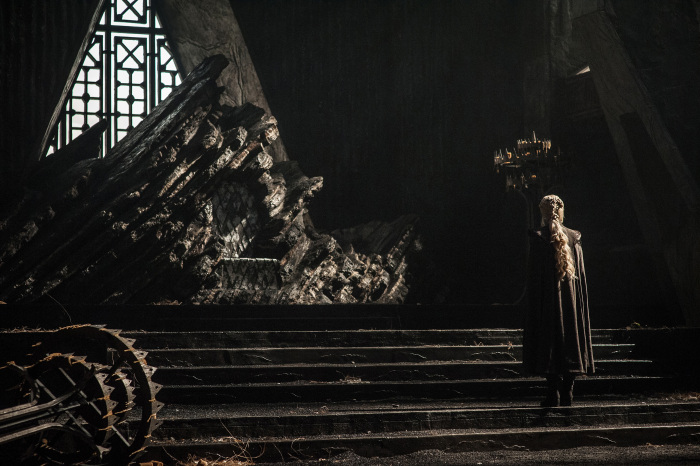 Chamber of the Painted Table: This is the one chamber we have seen in previous seasons, as Stannis Baratheon plotted the downfall of his brother Renly and “nephew” Joffrey. It is a cavernous, rectangular room that also houses another dragon head, this time carved in heavy relief on one wall. On the other wall is a large fireplace. The far end of the room is open to the elements and overlooks the ocean, though columns give the effect of windows without much light. In episode one, this is the last chamber we see. In the following episodes, this is where the allies assembled to discuss strategy.  Having Dany use this large map of Westeros used in planning military strategy, raised on a table, links her with the male military leaders we have seen in the show so far. (Interestingly, Cersei does have a map but has it painted on the floor of a courtyard and Sansa does not use a map to plan military strategy at all.)

The Caves: The reason that the North is even remotely interested in talking to Daenerys is because of a huge natural resource that they need: dragonglass. Upon arrival, Daenerys wasn’t even aware that this mine existed. We enter the caves midway through the season and we can see that they actually contain cave paintings. Modeled after Lascaux caves in France, the paintings depict a prehistoric battle against the White Walkers in the North (and provide an opportunity for Jon Snow and Dany to be in close quarters in candlelight).

For a castle that is supposed to be a palace and a home, Dragonstone did not feel warm in any sense of the word. The Targaryens held the Iron Throne for many years so it only follows that the home of their heir, the future of their house, would be a place of intimidation and authority. While we’ve previously seen more private rooms while Dany was in Mereen, Dragonstone was established this season as the heart of Daenery’s diplomacy and military negotiations. The island and castle served the important roles to the plot for this season but it’s unclear how it will impact the plot, if at all, moving forward.

Returning to her family’s home is in some ways the moment Daenerys steps into the Westerosi arena and starts to play the Game. Until this point, Dany has been off in foreign lands with her own specific brand of conquest. She had been making and breaking rules as she went but by establishing her base at Dragonstone, she is fully taking on the mantle as a Targaryen in Westeros. This calls into question how much of that family identity she really wants to wear: in some cases it is useful for her to assert that she is a Targaryen, the sister of Viserys and Rhaegar. At other times, she chooses to distance herself from the father she never knew, the Mad King Aerys. Before the other rulers know her better though, it is only fitting that the Dragon Queen should have a Dragon castle.

It makes strategic sense for her to return to the island because it allows her to establish a home base instead of rolling into King’s Landing, dragons blazing. And of course this is a very important personal moment for her, one that the writers never unpacked before she had to put on the airs of a ruler worthy of the Iron Throne. However, I don’t know how much we will see of Dragonstone in the last season of the show. We end the seventh season with our Dragon Queen on the road north for an epic battle from which she may not return.