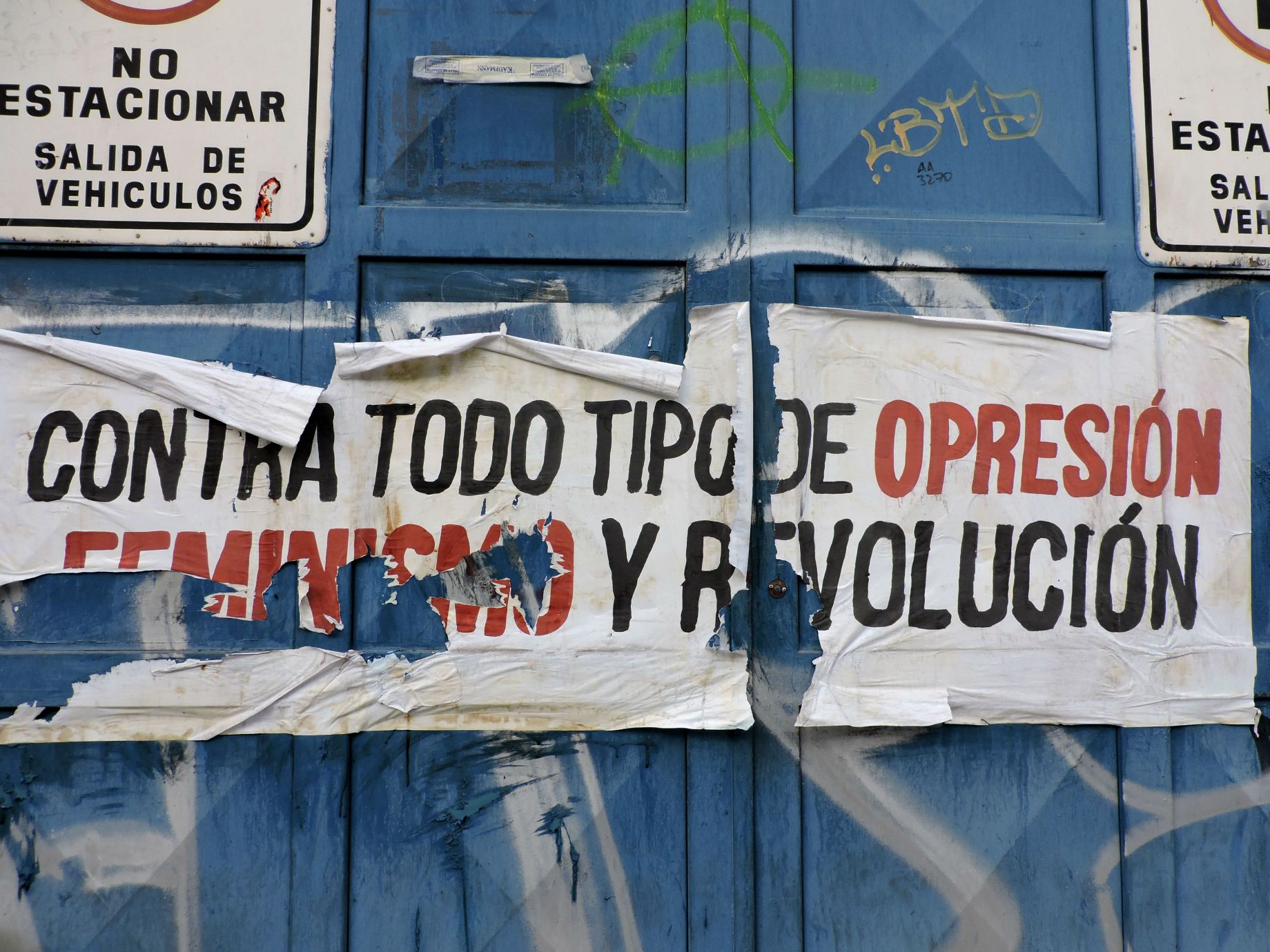 As I rode the Santiago metro to the National Museum of Fine Arts, more than a couple men bumped into me. No matter how much it irritates me, it is something I’ve grown used to from living in cities. Though people talk about Latin American machismo, I haven’t noticed much of a difference in gender dynamics between Chile and the United States. There’s some catcalling, some brushed shoulders on the sidewalk, some men who feel inclined to explain everything to you twice: by and large the same things I’ve encountered in any other city. So as I entered the Museum of Fine Arts to view its (En)clave masculino exhibit, I tried to think beyond culture or nationality. Much of what I saw in the Museum of Fine Arts was universal—the themes of gender that the exhibit dealt with raised questions that I’ve asked myself in classes and museums thousands of miles away. Yet, there was some distinctly Chilean element to the exhibit: an awareness of gender and power dynamics reflecting Chilean political history and modern social movements. This was the context I had in mind as I entered the (En)clave masculino.

Situated on the second floor of the National Museum of Fine Arts, the (En)clave masculino exhibit, is the largest exposition currently on display in the museum. Spread out across two wings, the exhibition includes one gallery focused on conceptions of male identity in art and another dedicated to the themes of power and submission. The nearly one hundred pieces on display in the exhibition include portraits of men, paintings of fathers with their children and husbands with their wives, depictions of Christ and mythic figures like Sisyphus and Prometheus, nude paintings of female models and slaves, and portraits of androgynous children. As curator Gloria Cortés Aliaga writes in the introduction to the exhibit,

The first gallery, titled “Identidad masculino” (Masculine identity), begins with traditional depictions of men, including soldiers, fathers, husbands, and sons—and then considers how this traditional identity might be distorted. Namely, (En)clave masculino asks how artistic ideals have “feminized” male forms before delving into themes of homoeroticism and androgyneity. Through brute forms and soft bodies, (En)clave masculino contrasts powerful and gentle men. A rough and muscular portrait of Sisyphus pushing his rock through Tartarus hangs side-by-side a painting of the restrained and powerless Prometheus. Depictions of men forming bonds of companionship in war contrast with men falling in love. Portraits of soldiers and governors stand alongside portraits of fathers. Paintings emphasizing the angular strength of men hang not feet from statues tracing the soft lines of male faces. Before even introducing women, the exhibit plays with the idea of what it means to be a man and asks where the lines between genders fall.

Just down the hallway, the exhibition transforms into the second gallery: “Poder y sumisión” (Power and submission). Here, female portraits almost outnumber male ones. However, as the gallery title suggests, these portraits do not solely depict women, but rather their relationships with men. The first half of the gallery includes portraits of female slaves and nude models—their bodies idealized, sexualized, and transformed into objects of desire. It bothered me, as a women’s college graduate, that the only representation of women that I could find in the exhibit was through the male gaze, that instead of artists there were only models, instead of mothers, only wives, and instead of women, only daughters. The second half of the gallery continues with the theme of power by exploring ideas of masculine violence, particularly through paintings of war and abuse. In the end, the exposition raises questions beyond gender dynamics; taking up broad themes of power, hegemony, domination, oppression, and colonialism. The exhibit itself is not simply about men and women in art, but rather how the relationships between men and women contribute to larger social debates, such as those currently occurring among Chilean students.

Though the exhibit ended here, my experience of it certainly did not. Throughout my visit to (En)clave masculino I found myself grappling with a question long after I went home. In the first half of the exhibit, just across the hall from a recreation of The Two Fridas (depicting two men in rather than women), a paragraph on the gallery wall had reminded me of the absence of women in art institutions. Reading “Solo dos mujeres han sido directoras del Museo Nacional de Bellas Artes desde su fundación en 1880. Ambas en época de dictadura [Only two women have been directors of the National Museum of Fine Arts since its founding in 1880. Both during the dictatorship]”, this paragraph reminded me that women have historically struggled to hold leadership positions, and that that struggle might influence the art to which I am exposed. Indeed, the description went on to recount that “Solo el 11% de la colección del Museo corresponde a creadoras/productoras de arte en Chile [only 11% of the Museum’s collection belongs to female art creators/producers in Chile].” Struck by how the only representations of women in the museum were depicted through the male gaze—models, slaves, mothers, daughters painted by men but never from the perspective of female artists—I wondered how clearly the exhibit could consider femininity in a space dedicated to masculinity. And so my question became, how accurately can a museum, or community, discuss gender when its representations of gender have been colored by the absence of women for generations?

I doubt I am alone in my concern; throughout the exhibit I got the sense that the curator, a woman herself, stood with me in my curiosity. Indeed, from the beginning of the exposition, Cortés emphasized that the role of curation is to “cuestionar los modelos de género promovidos por el arte en tanto dispositivo articulador de imaginarios y contenidos .” She goes on to say “no solo coleccionamos arte, sino también ideas y formas de pensamientos [we don’t just collect art, but rather ideas and ways of thinking].” In this background text, I believe that Cortés is admitting to the absence of women’s artwork in the museum collection and questioning what kinds of conversations can be had about gender without equal representation.

Cortés certainly isn’t the only person to raise these questions about art, gender, and power in Chilean culture. Any visitor to Santiago who’s passed by a university or walked through downtown during a student protest can attest to the liberal and even feminist dialogues that students are holding as departments at the University of Chile go on their eighth week of strike. In what I’ve come to see as a reaction to the conservative fascism of the 1973-1990 Pinochet dictatorship which overthrew the communist government of Salvador Allende, youth politics in Chile tend to lean towards reestablishing and growing liberal movements. Over the last two months, a majority of Chilean students have either been in parro (a strike where students vote together not to attend school), toma (a different kind of strike where students actively sit-in on their universities by barricading the doors and windows with chairs and taking shifts sleeping at the school), or marcha (marching in the streets, often in authorized protest supervised by police in riot gear). The goal of these parros, tomas, and marchas is ultimately free education for Chilean university students, but also better quality education both at the university and high school level, more financial aid, and generally more liberal education policies.

Wandering through university neighborhoods, I’ve found students selling pamphlets on Peruvian anarchist movements, banners that exclaim “Menos represión, más educación [Less repression, more education],” and paintings of arguing politicians ignoring the shouts that “Lo que el pueblo necesita es educación gratuita [What the people need is free education].” These political conversations have not been devoid of feminist dialogue, in fact many of them have taken up a perspective that matches Cortés’s critique of the art world. With posters calling for the end of sexist education and brainstorming sheets asking what the protest movement needs and answering with “feminism,” Chilean students are clearly considering the place of feminism within liberal movements. And not just the feminism that asks for women to be treated as equals, but the feminism that asks for broader consideration of social inequality–of gender, class, race, nationality, and much more. Much like the (En)clave masculino, students are asking what inclusivity looks like; they’re asking who has been excluded from the conversation. That is to say, if women are absent in art and students who cannot afford tuition are not enrolled in university, are the conversations had by artists, protesting students, and the larger educational system meaningful?

In the paros, tomas, and marchas this past month, as well as in the National Museum of Fine Arts’s (En)clave masculino exhibit, I see the Chilean people grappling with a history of colonization, dictatorship, and manipulation that their youth hope to transform through education and inclusive dialogue.

Cecilia Nowell is riding out her post-college-graduation-existential-crisis in Santiago, Chile with a journalism grant to write about political art and literature. Following her interest in the social impacts of storytelling, Cecilia studied Comparative Literature and Political Science at Wellesley College while also editing the campus’s nonfiction magazine Counterpoint. After this summer (or Chilean winter), she plans to work (please call her if you are hiring) before returning for graduate school in literature.

5 comments on “Machismo and Marchas: Gendered Art and Politics in Chile”